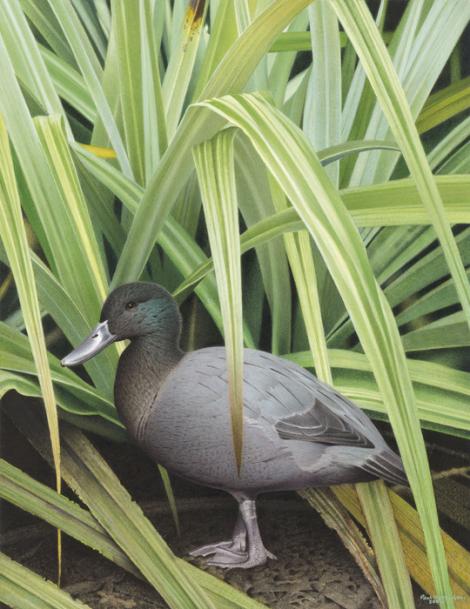 The Chatham Island duck is one of eight species of waterfowl that occupied the Chatham Islands prehistorically. It is known only from a few hundred fossil bones from the main island in the Chatham Island group. It was a large, sturdily built duck but as there are no records of the species being seen alive, its ecology can only be guessed at. It was a victim of hunting by the first Polynesian settlers to the Chatham Islands, so may have died out hundreds of years ago.

It was first described by W.R.B. Oliver in 1955, based primarily on a cranium held in the Canterbury Museum. It is a highly distinctive species whose relatives have been determined, using DNA analysis, to be the much smaller New Zealand teals (Anas spp.).

The colours of the Chatham Island duck's plumage and soft parts were never recorded, so any reconstructions of its appearance are speculative. In size and shape it approximately resembled a paradise shelduck. It had similarly long legs but, proportionately, its wings were shorter and its beak was longer.

Fossil bones, up to a few thousand years old, of the species have been found only on the main island in the Chatham Island group. The lack of fossils of the species from other islands in the group may be explained by the lack of large lakes or lagoons on those islands.

As fossil bones of the species have been found on a single island only, the species was apparently highly restricted in its distribution and therefore probably never numerous.

The species became extinct prehistorically through hunting. As it was large and flightless, the Chatham Island duck would have been a good food source for the earliest Polynesian settlers on the Chatham Islands.

Most of its ecology can only be speculated upon in the absence of any records of live birds. The species had a bill typical of a dabbling duck, and so it is presumed to have fed on items in the extensive brackish Te Whanga lagoon that dominates Chatham Island. Possibly it also ventured into sheltered coastal waters. Its wings were so short that it was certainly flightless. It had impressions for salt glands on the top of its skull which indicates that it spent some of its life in salty water. Large wing spurs, probably used for fighting, suggest that the species was highly territorial.

There are no records of its food or feeding habits, but based on the shape of its skeleton, the species wasn't a diver and may have grazed on vegetation or eaten invertebrates, such as crabs and shellfish.

Millener, P.R. The history of the Chatham Islands' bird fauna of the last 7000 years - a chronicle of change and extinction. Pp. 85-109 in Olson, S.L. (ed.) Avian Paleontology at the close of the 20th century: proceedings of the 4th international meeting of the Society of Avian Paleontology and Evolution, Washington, D.C., 4-7 June 1996. Washington, D.C.: Smithsonian Institution Press.