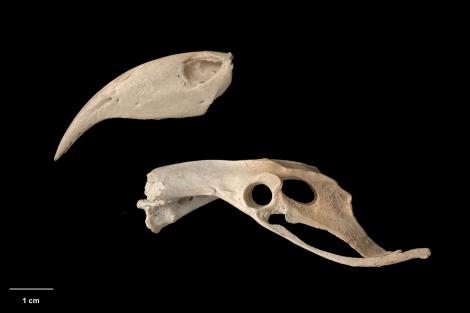 The Chatham Island kaka is known only from bone deposits on the Chatham Islands that are a few hundred to a few thousand years old. Its remains were first collected in the late 19th Century.  However, ever since then there has been confusion about which species these bones represented, with suggestions that they may have been from either kea or kaka. The possibility that the bones could represent an undescribed species was first raised in the 1990s and the Chatham species was described formerly in 2014. Today one species of kaka survives on mainland New Zealand but until the early 1800s a third species occurred on Norfolk Island, to the north-west of New Zealand.  DNA analyses suggest that the Chatham Island parrot originated from a kaka that flew to the island group around 1.7 million years ago. This was probably not long after the islands emerged above sea level.  Little is known about the Chatham kaka as it became extinct in prehistoric times.

Fossils of the Chatham Island kaka have been found on main Chatham, Pitt and Mangere Islands, so it was probably present on other vegetated islands such as Little Mangere and Rangatira Islands too. The sites where its bones have been found are in widespread locations suggesting that the species was somewhat of a generalist but presumably it would have mainly inhabited forests, which were widespread on the island group in pre-human times.

The Chatham Island kaka became extinct in prehistoric times, and no records of live birds exist. A few bones have been found in human food middens, and hunting for food by people is probably the primary cause of the species’ demise, although habitat clearance and predation by Pacific rats may have contributed.

Nothing is known about the breeding habits of the Chatham Island kaka.

The relatively large thigh bones and broad pelvis suggest that the Chatham Island kaka spent more time walking around on the ground than its mainland cousin. However it was still capable of flight.