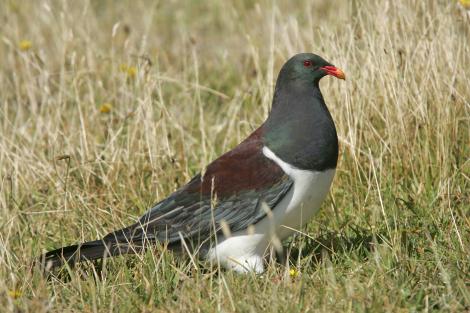 The Chatham Island pigeon (parea) is a large and distinctively-coloured forest pigeon. Because it is mainly restricted to southern Chatham Island, where extensive forest habitat still occurs, the sight of a parea is not an everyday occurrence for most Chatham Islanders. However, like its closely-related species in New Zealand, the kereru, parea often roost conspicuously on tree tops and allow close approach, and so good sightings can often be had once an individual is seen. During spring, parea spend much time feeding on clover leaves, including along roadsides. The species’ improved conservation status since the 1990s is mainly due to ongoing pest control, particularly of feral cats.

The head, neck and upper breast of parea are blackish blue with a faint green and blue iridescence; the mantle and wing coverts are maroon with maroon iridescence. The rump and tail coverts are pale grey with a faint green wash, contrasting with the darker back and wing coverts. The exposed portions of the flight feathers are mainly grey. The upper surfaces of the tail feathers are black, and the lower breast and belly are white. Strikingly, the bill is red with a robust orange tip, and the legs and eyes crimson. Fledglings and juveniles have duller plumage, and often the white breast is smudgy white-grey, with the demarcation between black-blue and white feathering being ragged, and there may be a narrow border of cinnamon wash over the upper white breast feathers.

Voice: parea are generally silent except for occasional ‘oos’. Brief, moderate volume ‘oos’ are given when alarmed, and longer, low volume ‘oooooos’, with a rising tone towards the end are given as contact calls. Nestlings give low volume squeaks to a parent when begging to be fed.

Similar species: there are no other forest pigeons present on Chatham Island. New Zealand pigeon (kereru) is slightly smaller, does not have the pale contrasting rump of the parea, and the bill is concolourous, without an orange tip. Kereru have not been recorded from the Chatham Islands, but an ancestor of the two species must have flown the 800 km water gap from mainland New Zealand to the Chatham Islands in the past.

While formerly present on Pitt Island, and probably some of the offshore islands too, today the parea is confined to Chatham Island. Most of the population occurs in southern Chatham Island, with a few parea resident in forest patches near the southern and western shoreline of Te Whanga Lagoon, and intermittently in forest patches elsewhere on the island.

Parea use three main habitats, native forest, including extensive tracts and small patches, stunted scrub- and bracken-covered areas, and pasture adjacent to forest or shelter-belts. In addition, parea have fed in a Brassica crop planted for stock.

The main threat to parea is predation by introduced pests; feral cats, possums, ship rats and weka. Parea forage on the ground in forest and among shrubs and bracken at the forest margin, and so are vulnerable to cat predation. Occasionally pairs nest on the ground or close to it and so eggs, nestlings and incubating or brooding adults are vulnerable to predation by weka, feral pigs and cats. The control of pest populations not only reduces the incidence of predation but also benefits forest regeneration and fruit availability. The fencing of reserves and covenants, excluding feral and farmed stock, has also benefited forest regeneration and so improved habitat quality for parea. The conservation of this species was moved from nationally critical to nationally vulnerable in 2013.

Although pairs have been found breeding in all months, parea nest predominantly during winter and spring (June-November). The timing of the nesting season and the proportion of pairs that breed varies between nesting seasons. In seasons when fruit is readily available many pairs rear two chicks (i.e. two separate breeding efforts), often involving overlapping nesting attempts. The nest is a platform of dead twigs, and a single egg is laid. Females incubate from late afternoon until mid-morning, the male during the rest of the day. The chick is brooded constantly until 10-15 days old and well covered with feathers. From then until the chick leaves the nest it is left alone by day, with the occasional brief visit by a parent to feed it.

Parea pairs defend territories during the breeding season, roosting conspicuously on the tops of dead trees or an exposed branch in an elevated area (hilltop or ridge crest). During the breeding season a parea will often respond to another flying over its territory by undertaking a display flight.  This involves the bird flying up steeply, stalling with wings and tail spread, gliding back to a perch and then standing erect with chest feathers puffed out. Display flights are also given by birds returning to their territories. Not all foraging is undertaken within the territory; individuals or pairs occasionally fly to Dracophyllum-dominated forest, pouteretere bushes in semi-open shrubland or pasture to feed. Stock-grazed areas of pasture close to the forest edge attract parea in the non-breeding season, with a flock of over 100 parea occasionally seen near Taiko Camp adjacent to the Tuku-a-tamatea River.

Parea eat mainly leaf buds, leaves, flower buds, flowers and fruit from a variety of species. Fruit seems to be the preferred food type. However, although pairs rearing young ate mainly ripe fruit, they also included flower buds, flowers and leaves in their diet. Abundance of hoho (Pseudopanax chathamicus) fruit, which ripens in winter-spring, has quite an influence on the timing and duration of breeding by parea. When little or no fruit is available, parea feed mainly on leaves. This includes the relatively tough leaves of hoho, which the parea’s robust beak (compared to that of the New Zealand pigeon) may have evolved to enable the species to be able to feed on.

A very large heavy arboreal pigeon with an orange-tipped red bill, crimson legs and reddish eyes. The blackish-blue head, neck and upper breast have a faint green-blue iridescence, the maroon mantle and wing coverts have a maroon iridescence, and the underparts are white with a sharp demarcation between the white and blue-green on the upper breast.