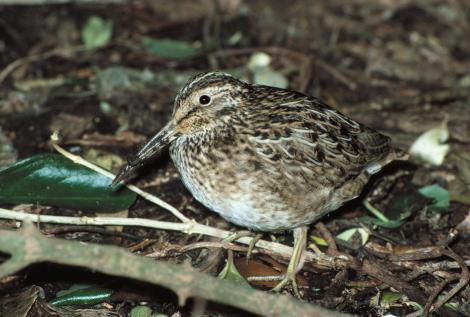 The smallest of the New Zealand snipes, the Chatham Island snipe is restricted to a tiny fraction of its original range. On the few islands where it survives, it remains an abundant though inconspicuous species. Well camouflaged and typically keeping to dense vegetation during daylight, Chatham Island snipe become more obvious after dark when they venture into open habitats, and their loud calls are often heard both from the air and the ground.

The only snipe species currently present on the Chatham Islands, and unlikely to be confused with any other species there. Richly patterned above with brown and black, with buff feather edges, Chatham Island snipe have pale belly feathers with little barring (cf. the larger Snares Island snipe). The bill (42-48 mm) is about 10 mm shorter than for subantarctic snipe, and is also relatively shorter in relation to body size. Legs pale yellow (male) or greenish (female). Males are also slightly smaller than females, and have brighter, more distinct dorsal markings when a pair is seen together. Juveniles have olive legs, and more sombre plumage than adults, with less distinct markings.

Voice: The main call is a loud ‘chup chup’ given by adult males, building to a series of dysyllabic calls ‘queeyoo queeyoo’. The latter is also given in the air at night as the start of the ‘hakawai’ aerial display (see Behaviour and ecology). The alarm call – a strident ‘chep’ – is also often heard at night.

Originally found throughout the Chatham Islands, this snipe is currently present on Rangatira, Mangere, Little Mangere and Rabbit Islands, and Star Keys. Birds are occasionally seen on Pitt Island. Apart from Pitt Island, all these islands are now free of introduced mammals, and snipe are abundant anywhere that has dense ground cover. Important habitats include Carex sedge under open forest, Muehlenbeckia vinelands, rank grass (both exotic and indigenous), and regenerating shrubland.

About 1300 birds estimated on 249 ha Rangatira Island. Assuming similar densities on the four smaller islands (combined area 150 ha), the total population is likely to be about 2000 birds.

Snipe are presumed to have been extirpated by Pacific rats on Chatham Island between 1500 and 1800 A.D., and by feral cats on Pitt Island by the late 1800s. The species was first discovered in 1869, on 131 ha Mangere Island. Snipe disappeared from Mangere Island about 1900, soon after the introduction of cats there. For many years believed confined to Rangatira Island, snipe were discovered on Star Keys (c.10 ha) in 1974. Following the eradication of cats on Mangere Island, 23 snipe were reintroduced from Rangatira Island in 1970. They have thrived, and from there have colonised nearby Little Mangere Island (19 ha) and Rabbit Island (2 ha). Twenty snipe from Rangatira Island were released into a predator-fenced conservation covenant on Pitt Island in 2008, but apparently dispersed within a year.

Chatham Island snipe have a long breeding season, with eggs laid from late July to early April. The two large pinkish-brown eggs speckled with dark brown are concealed in a ground-level nest, usually among or under sedges, grass or other vegetation. Both sexes share incubation, which takes 18-20 days. The chicks leave the nest on the day of hatching, with the male caring for the first chick to leave the nest, and the female the second. Both of the parent-chick pairs forage independently of each other during chick-rearing, Chatham Island snipe are typically encountered as pairs – either a breeding pair or an adult with a dependent chick.

Chatham Island snipe can be seen foraging at any time of day or night. Although present throughout vegetated areas, they are most easily seen under forest on Rangatira and Mangere Islands. Here they are encountered as singles, breeding pairs, or parent-chick pairs, moving quietly over the forest floor. The usual feeding method is to probe a small area intensively, then to scuttle forward before probing a new area. Food is passed from bill-tip to bill-tip, both from adult to chick, and male to female when courtship feeding. At night they venture into more open areas, including coastal saltmarsh, where they would be vulnerable to harrier and skua predation in daylight. Chatham Island snipe rarely fly during the day unless startled. On clear moonlit nights they are often heard in flight, including performing the hakawai display. This spectacular display has never been seen being performed. It starts with a series of calls identical to the high-intensity male territorial display ‘queeyoo queeyoo’ repeated several times, followed by a loud roar made with the tail feathers as the bird swoops over the forest canopy. The display causes characteristic damage to the tail feathers, readily observable when birds are handled.

A small, well camouflaged, long-billed 'shorebird' confined to small islands near Pitt Island. Most often seen among or under dense vegetation, and rarely near the shore.