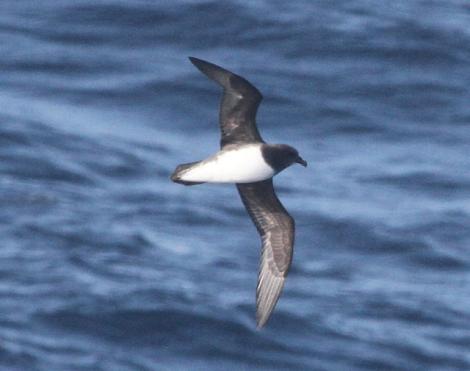 The Chatham Island taiko is one of the rarest seabirds in the world. Fewer than 200 are thought to exist. They breed only in dense forests at the southern end of main Chatham Island. Taiko were formerly hunted by early Polynesian settlers but the colonies disappeared to human knowledge about 100 years ago. At sea, one bird was taken as a specimen in 1867 and named the Magenta petrel after the Italian expedition’s ship. Bill Bourne made the first connection that the Magenta petrel and the “extinct” Chatham Island taiko might be the same species. New Zealand ornithologist David Crockett carried out a series of expeditions to the Chatham Islands and rediscovered the species in 1978. Birds captured in flight by spotlighting were tracked using radio transmitters to locate their breeding sites. Very few breeding pairs remain so an intensive conservation programme is run annually to protect this summer-nesting seabird.

The Chatham Island taiko is a medium-sized dark-grey-and-white petrel with a distinctive dark-hooded head, long narrow wings and a long pointed tail. As with other gadfly petrels taiko have large heads, a high forehead, and little neck apparent. The upper surface is uniform dark slate-grey fading to brown with age. The neck and upper breast are also dark. A white chin patch occurs on some birds. The remaining underside is white, including the undertail, and contrasting with the dark-grey underwings. In the hand, the stout black bill (32 mm long and 15 mm deep) has a sharp hook and the tubed nostrils are prominent. The eyes are dark and the legs are pink/white with black patches on the toes.

Voice: Chatham Island taiko calls are similar to those of soft-plumaged petrels. The main calls are moans (ooooorr and uuuur sounds) plus higher-pitched squeaky calls given in burrows.

Similar species: many other petrel species can appear ‘hooded’ at sea, and some have overall plumage pattern almost identical to taiko. Those with only partial hoods (soft-plumaged petrel, Hutton’s shearwater and grey petrel) are readily ruled out with adequate views; both Hutton’s shearwater and grey petrel have slimmer beaks (not black), smaller heads and longer necks. Soft-plumaged petrel has more extensive pale chin and cheeks, and usually shows a trace of an 'M' mark across the upperwings (never apparent in taiko). The remaining four species are all tropical or subtropical and unlikely to be seen near Chatham Islands: Kermadec petrel, Herald petrel, Phoenix petrel and Tahiti petrel. However, Chatham Island taiko range into subtropical waters and may overlap with any or all these species in a swathe between the Coral Sea and Easter Island. Kermadec petrel and Herald petrel are both variable species: both have white flashes on the outer underwing (though taiko underwings can reflect light, and may show white on outer underwing during winter moult), and birds appearing as hooded as taiko are likely to have dark undertails. Phoenix petrel is slightly smaller and slimmer, and usually has a pale stripe along the leading edge of the inner under-wing. Tahiti petrel holds its wings straighter and has languid flight style, compared to most gadfly petrels (including taiko) holding wings slightly flexed, and with rapid, impetuous flight.

Chatham Island taiko only breed on main Chatham Island. They are confined to forests in the southern tablelands up to 5 km inland from the sea. The breeding burrows are in peaty soil under dense tall forest and tree ferns. The birds nest on slopes and valley floors, usually near water courses. They need to climb trees to get airborne to return to sea. The burrows are widely scattered over thousands of hectares of habitat. At sea the distribution of Chatham Island taiko is now better known thanks to recent tracking studies. During the breeding season, the birds feed mainly south and east of the colonies, ranging thousands of kilometres. During the winter exodus, they disperse widely across the Pacific Ocean from the Tasman Sea to South America, and into tropical seas.

The exact population size of this species is hard to determine as the birds are widely scattered. However repeated captures of birds, marked as adults and chicks at spotlighting sites near the coast, suggests that fewer than 200 remain today. About 20 breeding burrows are currently known.

The major threat to Chatham Island taiko is mammalian predators on their breeding grounds. Feral cats, three species of rat, feral pigs and possums have all been introduced to Chatham Island. Also weka were introduced and are a threat to eggs and chicks. Intensive pest control has been undertaken since 1987 to control all animal threats. Cat control using traps, and rodent poisoning are the main techniques. The Tuku Nature Reserve where most birds breed has been fenced off from feral sheep and cattle. In 2006 a predator fence was built around a hilltop at Sweetwater Covenant and nearly 60 taiko chicks were transferred to there from 2007 to 2011. This should provide a secure breeding site in the long term. The Chatham Island Taiko Trust was formed to help assist with taiko conservation. Ornithological Society volunteers have played a key role in rediscovering and protecting taiko since 1974 (including rediscovery in 1978). Recent research on the conservation genetics of this species has shown that problems caused by breeding with close relatives may be an emerging risk to this small population. There are no major at-sea threats to Chatham Island taiko.

The Chatham Island taiko breeding season is broadly September to June with the single white egg laid in late November or December and hatched in January-February. The egg is laid in a well-lined nest at the back of a long burrow dug into peaty soil. The birds mostly breed annually; very few pairs skip a breeding season. Both partners share incubation shifts and feeding of their chick. The chick is independent of the parents at fledging.

Chatham Island taiko are nocturnally active at breeding grounds. Video footage shows they can land and enter their burrows within 5 seconds. They often spend 15-30 minutes sitting in burrow entrances checking surroundings before they climb up a tree to depart. Their activity ashore is more pronounced on dark nights during periods of wet weather, especially foggy nights. Very few Chatham Island taiko have been observed at sea but recent tracking studies show they forage over deep water. Calling activity at night is very limited. Many unpaired males are present and finding partners seems to be a problem for this species. The birds are sometimes seen giving moaning calls from burrow entrances in the hope of attracting a mate.

Taiko diet remains poorly known. Fish and squid are the two most commonly regurgitated items. The birds are able to feed both by day and at night.

A medium-sized gadfly petrel with a large dark-hooded head and high forehead, dark neck and upper breast, long narrow wings, long pointed tail, hooked black bill and pink-white legs. The upper surface is dark slate-grey fading to brown with age, the remaining underside is white, including the undertail, contrasting with the dark-grey underwings, and some birds have a white chin patch.