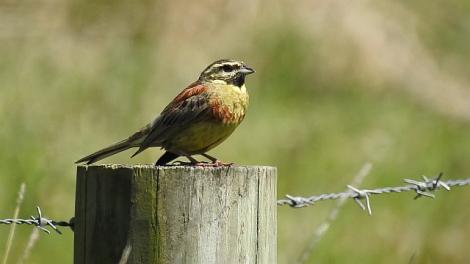 Cirl buntings are the least-known and most localised of New Zealand’s introduced song birds. They were introduced in small numbers from Britain between 1871 and 1880. Cirl buntings are largely birds of low rainfall areas, found mainly in farmland habitats with patches of scrub, hedgerows and scattered trees. The males are an attractive and boldly marked bird, whilst the females are comparatively drab and streaked. They feed on a diet of seeds and a wide variety of insects. They are  territorial and mostly sedentary, and do not associate a great deal with other bird species, except at a good food source.

Cirl buntings are roughly the size of a house sparrow. Males have a distinctive facial pattern: a black line runs through the eye, with yellow lines above and below it; there is a black bib on the throat with a yellow band beneath it. An olive-green band runs across the upper chest. In winter the plumage is duller due to the presence of buff tips which wear off by spring. Females and juveniles are brownish and streaked, with diagnostic pale horse-shoe shaped markings on the ear-coverts.

Voice: the male has a rattling song similar to part of a greenfinch song, repeated up to nine times per minute. A high-pitched contact call is uttered frequently between birds in pairs or small flocks, except while feeding. A loud chattering call is used during territorial disputes.

Similar species: the closely related yellowhammer is superficially similar, but both sexes show more yellow colouration, especially on the head. The rump is chestnut in both sexes, compared with olive-green in the cirl bunting.

Cirl buntings are mainly found in low-rainfall regions of the eastern South Island. They require dry summers in order to breed successfully. Cirl buntings are widespread from the Marlborough Sounds south to Kaikoura, being most common in parts of the Awatere Valley. They are present at scattered sites in Canterbury, from Waiau south to Timaru. There are widespread records from coastal North Otago and Central Otago. Cirl buntings are also present in the Nelson region, with records from coastal Golden Bay and Motueka as well as from a number of sites closer to Nelson. Vagrants have been reported from Southland and the West Coast. In the North Island, cirl buntings are known to have been breeding regularly at two sites in Wellington since 1991. There are scattered records from Northland, Auckland, Gisborne, Hawke’s Bay, Manawatu and Wairarapa. Single birds or small flocks have been recorded from Stephens, Mana, Motuora and Waiheke Islands.

The natural range of the cirl bunting extends from south-west Britain south to the Mediterranean Sea and east to Yugoslavia, Greece and Turkey; also North Africa.

Cirl buntings have restricted habitat preferences compared to other songbirds introduced and established in New Zealand. They prefer dry open pastoral country with patches of scrub, scattered trees and hedgerows, where the grass is kept relatively short by the grazing of livestock. Cirl buntings have a particular liking for the lower slopes of hills, gullies in rolling country and river terraces with the above vegetation types.

Cirl buntings are rare or absent from most of New Zealand, but are fairly common at a few favoured localities in the South Island. The total New Zealand population has been estimated at 2000 - 5000 birds.

There are no reported economic or ecological impacts from this species; nor are any likely, as the population size is small.

Due to their narrow range of habitat preferences, changes in land use may have a detrimental impact on cirl buntings. There has been a proliferation of vineyards in one of the more favoured localities in New Zealand - the Awatere Valley. This may have caused a substantial decline in the population of cirl buntings there, due to the loss of habitat. The conversion of rural land to residential uses on the outskirts of Christchurch has likewise been linked to a decline there. The removal of livestock from farmland can also impact this species negatively, as they prefer close-cropped sward for foraging.

Male cirl buntings establish territories in late September and sing to attract a mate. These territories are relatively large; 12 were counted on a 500 ha farm in Marlborough. A loose nest sited in dense vegetation is built by the female, and is lined with fine fibres. 2-4 (typically 3) eggs are laid. Both parents feed the chicks. After fledging, the female is likely to nest again while the male attends the chicks from the first nest.

Cirl buntings spend much of their time close to cover, feeding mainly on the ground. However, males frequently sing from prominent positions on the top of trees, bushes, fences, large rocks or power lines. They are inconspicuous, but can often be approached closely. Cirl buntings may join flocks of other species briefly when they feed in or near their territories. They are highly territorial during the breeding season, during which time this aggression may occasionally extend to territorial disputes with yellowhammers. Cirl buntings are largely sedentary; most birds remain in the vicinity of their territories throughout the year. Records from the Wellington south coast indicate that some birds cross Cook Strait.

Cirl buntings feed mainly on invertebrates and seeds, mostly collected from the ground. Chicks are fed on a variety of invertebrates, of which grasshoppers seem to be particularly favoured. Also eaten are cicadas, beetles, moths, caterpillars, aphids, flies and spiders. The seed component of the diet is mainly a variety of grass seeds. Ryegrass is a particular favourite, but barley grass and Poa annua are also commonly eaten. Other seeds which may be eaten occasionally are dandelion, wireweed, Amaranthus, fat-hen and chickweed.

A small songbird species in which adult males have a distinctive black line running through the eyes with yellow lines above and below, a black bib on the throat with a yellow band beneath it, and an olive-green band across the upper chest. In winter, the male is duller while the female is brownish and streaked year-round, with diagnostic horse-shoe shaped markings on the ear-coverts.

Song of male atop pine

Sip & seep calls given by male which then flies off