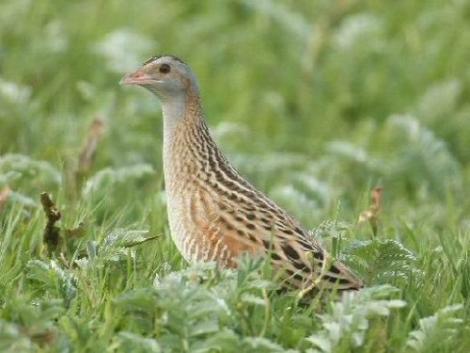 Rails are compact birds with solid bodies, strong legs, long toes, short, rounded wings and a short tail which is frequently cocked. The most familiar New Zealand species is the pukeko. Rails are seldom seen to fly any great distance, however some species undertake long migrations. At one time or another most oceanic islands have been colonised by rails, many forms of which subsequently became flightless, as have weka and takahe in New Zealand.

The most migratory of all the rails is the corncrake, a medium-sized rail that breeds from central Europe east to Mongolia and migrates to southern Africa in the non-breeding season. There is a single historical record from New Zealand, and two from Australia.

The corncrake is a typical rail, with a large body and strong legs. The plumage is mostly buffy with blackish brown streaking on the back; the face is grey with a buff streak through the eye. The corncrake is superficially like a weka but is generally much more secretive and usually only seen when flushed, when the uniform chestnut-coloured wings are distinctive.

Voice: in the breeding season a distinctive crex-crex is often given at dusk and night.

Similar species: weka is much larger (length 53 cm) and flightless. Banded rail is similar size but with white spots on upperparts and black and white barring on underparts.

Corncrakes breed across central Eurasia from western Europe to Mongolia, occurring in farmland and natural grasslands. They spend the non-breeding season in Zaire, Tanzania and eastern South Africa.

There is one specimen record from Nelson sometime before 1868. There are also 2 records from Australia of this long distance migrant. The world population estimated at about 1 million birds.

Corncrake populations are generally in decline largely as a result of intensification of agriculture.

Corncrakes breeds in grassland and hayfields. They are monogamous, laying 8-12 eggs in a simple scrape or nest on the ground in dense vegetation.

Corncrakes are very secretive and usually heard rather than seen. If flushed they fly only a short distance before landing in dense vegetation. The long distance migration of this species has resulted in records of vagrant individuals far removed from their normal distribution, thus the New Zealand record is surprising but not without precedent.

Corncrakes mostly consume invertebrates such as earthworms and insects, but also frogs and small mammals.

A flighted rail with a large body, strong legs, buff with blackish-brown streaking on the back, and a grey face with a buff streak through the eye. It looks superficially like a weka but is generally much more secretive and usually only seen when flushed, when the uniform chestnut coloured wings and ability to fly distinguish it.