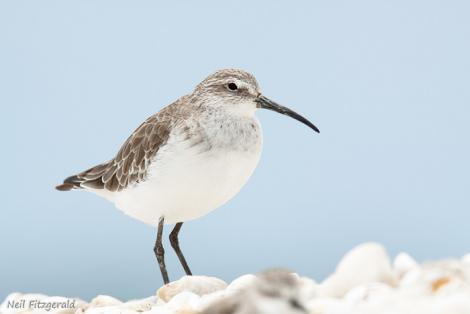 The curlew sandpiper is a small slender sandpiper about the size of a wrybill, which is also the species it usually associates with at high tide in New Zealand. It is a regular summer visitor to New Zealand, but in declining numbers. The global population is thought to be increasing but the East Asian-Australasian Flyway population is in decline. Probably fewer than 40 birds now reach New Zealand each summer.

The curlew sandpiper is an elegant, slender sandpiper; its relatively long thin legs (always black), long thin decurved bill and white rump distinguish it from all other small sandpipers. In breeding plumage the curlew sandpiper is dark red with fine white fringes to the body feathers, and the back is grey to black with red spots, contrasting with the white rump. The non-breeding plumage is very plain, with light grey-brown upperparts with fine white fringes to feathers, and mostly white underparts and bold white rump.

Similar species: western and broad-billed sandpipers have slightly decurved bills but are smaller with much shorter legs. Dunlin also has a slightly decurved bill but the bill is not as long and fine as curlew sandpiper and its legs are shorter. Dunlin breeding plumage is very different, with a black belly, but winter plumages are similar. The legs of the stilt sandpiper are greenish, never black.

Curlew sandpipers breed in the high Arctic from central to eastern Siberia, and formally around Barrow in Alaska. Their non-breeding grounds are in sub-Saharan Africa (right across the continent, along rivers and lakes and as far south as South Africa) and also Australasia, at coastal and inland sites. In New Zealand curlew sandpipers are rarely seen away from mudflats or shallow coastal pools. Curlew sandpiper can be found in major harbours and estuaries from Parengarenga, Far North to Awarua Bay, Southland, although its strongholds are now Manukau Harbour and Lake Ellesmere. Vagrant birds have also reached Chatham Island (January 1977) and Enderby Island, Auckland Islands (1972-73).

The global population of curlew sandpipers is estimated at 1.8 - 1.9 million and thought to be increasing. However, the East Asian-Australasian Flyway (EAAF) population was estimated at 180,000 in 1993 and is probably in decline. Numbers in New South Wales dropped from several thousand in the 1980s to less than 400 by 2010.  Less than 40 have reached New Zealand each summer since 2000, with rarely more than 2-3 overwintering.

Most waders migrating along the EAAF, particularly those using coastal and inland wetlands in China and Korea, are under serious threat from habitat loss, due mostly to reclamation and human based development and disturbance in the region. Breeding grounds and most wintering sites are probably secure, although inland wetlands used by curlew sandpiper in southern Australia have decreased in recent years, due to low rainfall and increased water usage for irrigation. The Bohai Bay in China is known be an important northward staging site; this region is experiencing massive industrial development, and so the population is likely to be further impacted in the coming years.

Curlew sandpipers breed in high Arctic tundra. Females incubate the clutch of 4 eggs alone, the males having left the breeding grounds soon after egg laying. Young are protected by the female until fledged. As with most sandpipers, chicks leave the nest soon after hatching and feed themselves on insects and other small invertebrates.

The curlew sandpiper is a very long distance migrant, although much of the migration and staging strategy is not fully understood. They reach New Zealand in September and October and are one of the last waders to leave in April and even the first week of May. Twenty-one have been banded in New Zealand on the Manukau Harbour, Firth of Thames and Manawatu Estuary. There have been regular resightings of these at the banding sites over several years, indicating some site faithfulness. A bird banded in its first year on the Manukau Harbour in April 1992 was retrapped 11 years later in Victoria, in January 2003.

Dawes, J. 2011. The declining population of curlew sandpiper Calidris ferruginea indicates that it may now be endangered in New South Wales. Stilt 60: 9-13