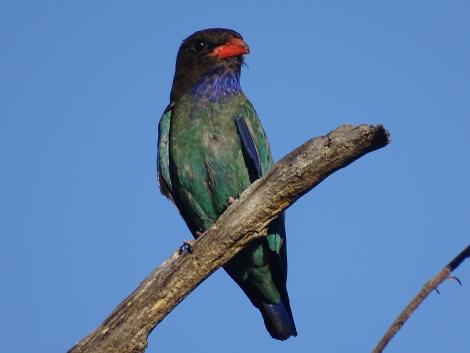 Dollarbirds look every bit as exotic as they are in New Zealand, with their fairly large size, odd shape and behaviour, and greenish-blue colour. Since the first known occurrence in the 1880s there have been more than twenty records, sometimes of several birds in a year. They have occurred throughout the North and South Islands, but Westland and the Far North have had more occurences than other areas.

With a range of unusual vocalisations consisting of conspicuous grunts and chattering calls, dollarbirds are frequently heard before being seen. They are fairly large, about the size of a tui but much stouter, stocky with short legs, a short tail and a very big head with a flat crown. In adults, the head and breast are dark brown, and the throat is glossy bright blue. The body is greenish blue and the flight and tail feather dark blue. The bird’s name is inspired by the pale blue patches near the wing tips that resemble ‘silver dollars’, which are very prominent in flight. The bill is large and bright orange-red in colour and the legs are almost as bright. Young birds are a little duller, have very little blue on the throat, and brownish legs and bill.

The flight pattern varies from slow and direct with deep wing beats to fast and manoeuvrable when feeding. The thickset body, large head and broad wings give dollarbirds a distinctive silhouette.

Voice: the call is a distinctive loud raspy cackle.

Breeding in eastern and northern Australia, but not Tasmania, dollarbirds migrate to south-eastern Indonesia, New Guinea and the Solomon Islands. Birds return to the breeding areas from late September to November and depart from February to April. These migration periods coincide with the dates of most records in New Zealand, suggesting that they are usually travelling birds blown off course. Most New Zealand records have been from lightly wooded rural areas.

Regarded as secure in Australia.

Dollarbirds are usually seen alone or in pairs, but groups of up to 50 may form for migration. They mostly live in open woodland but also use pasture with scattered trees and suburban parks and gardens. They feed in the morning and especially in the evening, with a period of inactivity around the middle of the day. The main prey is large insects which are watched for from prominent perches, often a dead branch or sometimes a power pole, with the bird sitting motionless except for the turning head. Prey are caught on the wing after a quick and agile pursuit and may be taken over the canopy, in clearings or over water from low levels, occasionally from the ground, and also up to great heights. Dollarbirds sometimes engage in aggressive territorial disputes with other bird species whilst defending feeding perches. Nests are constructed in the hollows of trees (there are no New Zealand breeding records).

Large flying insects such as cicadas, beetles and moths.

A large big-headed roller with a flat crown, large broad bright orange-red bill, short tail and short orange-red legs. The head and breast are dark brown, the throat is glossy bright blue, the body is greenish blue, and the flight and tail feathers are dark blue with round pale blue patches near the tips of the wings that show during flight.

Pair calling (other species in background)