Geographical variation: New Zealand birds have been assigned to the subspecies occidentalis, but this requires verification. 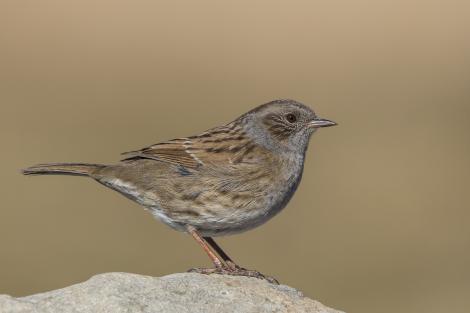 Dunnocks are small brown songbirds that were introduced from England into multiple regions of New Zealand between 1865 and 1896. They are a common sight in urban gardens and open country in southern New Zealand, but are scarcer in the northern North Island. The drab appearance of dunnocks is compensated by their stunningly complex breeding behaviours.

Dunnocks are small, slim songbirds with sombre brown plumage, streaked with darker brown on the back and flanks, and merging into the greyish eyebrow, chin, throat and breast. The blackish bill is fine and pointed, the iris of adults is red-brown, and the legs orange-brown. The sexes are alike; juveniles are similar but have brown eyes.

Voice: the song is a thin warble, similar in structure to a blackbird’s song, given by the male usually from a perch high in a tree. The contact call – a high pitched tseep – is a familiar sound of southern New Zealand suburbs, farms and shrublands in autumn and winter.

Similar species: with their drab brown plumage, and tendency to forage on the ground, dunnocks superficially resemble house sparrows. However, house sparrows are larger, have a robust, triangular-shaped bill, and have more patterned upperparts, including a pale bar on the inner wing.

Dunnocks occur throughout the country from sea level to subalpine scrub at 1,600 m altitude, in orchards, farms, suburban gardens, scrub and forest. They are a common bird in southern New Zealand, but are scarce north from Waikato north, and are rare in Auckland city. Dunnocks are common and breed in the Chathams, Antipodes, Auckland and Campbell Islands, and are recorded as vagrant to The Snares. There is no evidence of migratory movements within New Zealand. The natural distribution of dunnocks ranges from Europe eastwards to the Ural mountains in Russia and south to the Caucasus region and northern Iran.

Dunnocks feed mainly on insects and other small invertebrates (see Food below). Its consumption of small invertebrates, was among the reasons dunnocks were introduced into New Zealand by Acclimatisation Societies. It was thought by the settlers that dunnocks could be used to control the numbers of insect pests in orchards. There are no known negative impacts of dunnocks on native species, but they are one of the few introduced bird species that has colonised (and thrives on) our most remote and otherwise least-modified island groups.

Dunnocks have complex mating system. Adults form mainly polyandrous or monogamous breeding groups that defend small territories (average 0.24 ha). Polyandrous groups are composed of one female simultaneously paired with two to three males that may or may not be related to each other. Polygynandrous mating groups, in which two females build nests in the same territory and are concurrently paired to two or more males, have been observed in low frequencies. Multiple paternity broods (i.e. where chicks are sired by more than one male) are common. In polyandrous groups, approximately 45% of nestlings are sired by the subordinate male of the group. In monogamous pairs, nearly 25% of chicks are sired by a male other than the social partner of the female.

During the breeding season, females actively and profusely solicit copulations with their social partners and with extra-group males. The act of copulation is remarkable, while the female raises her tail and waggles it, the male pecks at her cloaca for up to a minute before mating. The nest is built by the female alone, and is usually constructed in the interior of dense bushes and shrubs. Females alone incubate the bright turquoise eggs, but receive some incubation feeding by males. During the nestling stage, females always feed the young, with males providing paternal care in varying degrees. After fledging, males take on a more pronounced role in caring for fledglings, while females prepare to re-nest (usually once or twice more per season).

Dunnocks forage on the ground and low levels of vegetation, such as bushes and shrubs, usually solitarily or in small groups (up to five adults). Their diet is mainly small invertebrates such as beetles, flies, ants and spiders. Adults often feed nestlings with much larger insect prey, e.g. moths up to 5-10 times their bill length.

A small slim songbird with sombre brown plumage, streaked with darker brown on the back and flanks, and merging into the greyish eyebrow, chin, throat and breast. The blackish bill is fine and pointed, the iris of adults is red-brown, and the legs orange-brown; juveniles are similar but have brown eyes.