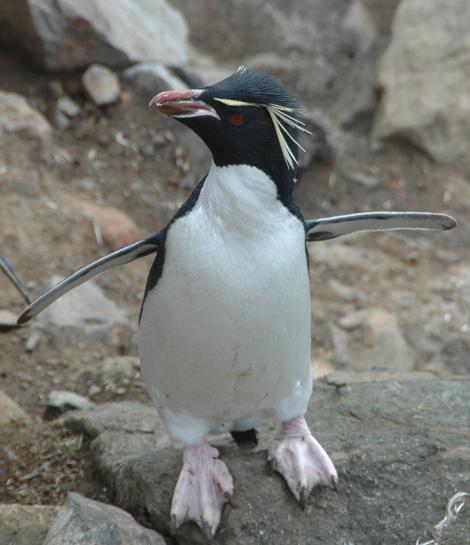 Eastern rockhopper penguins are readily identified as a species of ‘crested penguin’ (genus Eudyptes) by their spiky yellow crest feathers, black back, white front, and orange-brown bill. They are the smallest of the crested penguins. The yellow eye-brow stripe starts well back from the bill and is very thin until behind the eye, where it flares out as a crest that also includes long black feathers. Some crest feathers are pendulant, but barely reach as far as the black-white demarcation line on the throat (cf. northern rockhopper penguin). The two yellow crests are joined across the hind-crown by a shorter black occipital crest. The bare skin around the base of the bill (the gape) is pinkish-white in eastern rockhopper penguins. Although the bill is typically mostly orange-brown, in adults of the New Zealand region up to 90% of the lower mandible may be white, and a small amount of the distal end of the upper mandible may also be white. The eyes are red and the feet and legs are pinkish-white with black soles. Males and females differ primarily in bill size. Adult plumage is attained at 2 years of age. Fledglings (c.65 days old) are bluish black where they will later be black, and have a black bill and no obvious crest. In juvenile plumage (1-2 years of age), black parts may appear dark brown, the throat is mottled grey, the bill is smaller (mostly shallower) and more brown than orange, and the yellow crest feathers are short.

Within the New Zealand region, eastern rockhopper penguins breed at Campbell, Auckland and Antipodes Islands, and nearby Macquarie Island. Elsewhere they breed on Heard, Kerguelen, Crozet, Marion and Prince Edward Islands (all in the southern Indian Ocean). They breed in colonies of tens to tens-of-thousands of nests, reaching densities of 2.4 nests per m2 on open ground. Colonies are often on steep slopes near the sea, with nests often among and under boulders below eroding cliffs. Nest may also be in caves and up to 200 m inland and 100 m above sea level. Nests are composed of pebbles, sometimes lined with vegetation. Where colonies form amongst vegetation such as tussock, fern, or mega-herbs, the penguin’s guano and trampling usually kills the plants and causes soil erosion down to bare rock over a decade or two. On Antipodes Island eastern rockhopper penguins mainly nest on the inland edges of colonies of the larger erect-crested penguin.

There are very few confirmed records from the New Zealand mainland, as few of the reported sightings clarified which of the three forms (now species) of rockhopper penguin the bird belonged to. The only confirmed record since the 1970s was an immature bird that moulted at Cape Palliser, Wairarapa, in January-February 2017.

Low food availability, resulting from climate change, is thought to be the main cause of eastern rockhopper penguin population declines. This is likely to be due to changes in oceanic productivity near breeding islands requiring adults to swim further offshore, spend more time foraging, or return with smaller food loads when provisioning young. Adults that are experiencing nutritional stress related to low food availability make longer foraging trips, and chicks that are fed less often grow more slowly. Predation by sea lions, fur seals, skuas, and giant petrels may have important impacts on some populations. On Campbell Island, predation by New Zealand sea lions of adult eastern rockhopper penguins is the most important driver of the ongoing decline of the main study colony. Oil spills pose a looming threat, especially if attempts are made to extract oil from seas south of New Zealand. Competition with commercial fisheries is a potential threat, but detailed data on diet and foraging distribution is lacking.

Eastern rockhopper penguins are monogomous, with shared incubation and chick care. They lay a 2-egg clutch with no re-laying or double-brooding. Eggs are laid about 4-5 days apart. Proper incubation does not begin until after the second egg is laid. The first laid (A-)egg averages only 72% the mass of the second-laid (B-)egg. Fledging of 2 chicks is rare (<4% of nests). Typically only the chick from the larger, slightly earlier-hatching B-egg survives to fledge. Males return to breeding colonies in the first-half of October, females about a week later. Males and females fast ashore until their incubation foraging trip, averaging 36 days and 44 days after arrival, respectively. They lay mainly in the first-half of November, 12-21 days after females return. The first incubation shift of 7-10 days is shared, after which the female performs the second (14-17 days), and the male the third (7-9 days). Incubation periods average 33.5 days for B-eggs, and 39 days for A-eggs. Males continue their c.34 day fast while guarding their chick, females provisioning the chick daily. The downy chicks (brown, with off-white bellies) form crêches when about 24 days old, and both sexes make daily, or less often multi-day, provisioning trips until the chick fledges at around 65 days old. When food is abundant a parent may provision chicks twice in the same day, especially if both chicks are alive. The majority of males make a 7-11 day self-feeding trip when chicks crêche before beginning provisioning. Sub-adult penguins may return to colonies to prospect in mid-December and come ashore again in mid- to-late January to moult on the periphery of colonies. Adults return to breeding colonies about a month after chicks fledge, and moult over 3-4 weeks in April.

Eastern rockhopper penguins are migratory, offshore-foragers. They are thought to feed mainly more than 10 km offshore from breeding colonies , but this has yet to be studied in detail.

Small fish, squid, octopus, and krill-like crustaceans were found in diet samples from adult eastern rockhopper penguins collected during the chick-rearing period on Campbell Island. Other populations may eat a greater proportion of crustaceans. In 1985–1986, Campbell Island chick diet samples were dominated by a single fish species, southern blue whiting (Micromesisteus australis)(75.6 % by number of prey).

A medium-sized, stocky black-and-white crested penguin with spiky yellow crest feathers, black back, white front, and orange-brown bill. The eyes are red and the bare skin at the base of the bill, and the feet and the legs are pinkish-white.