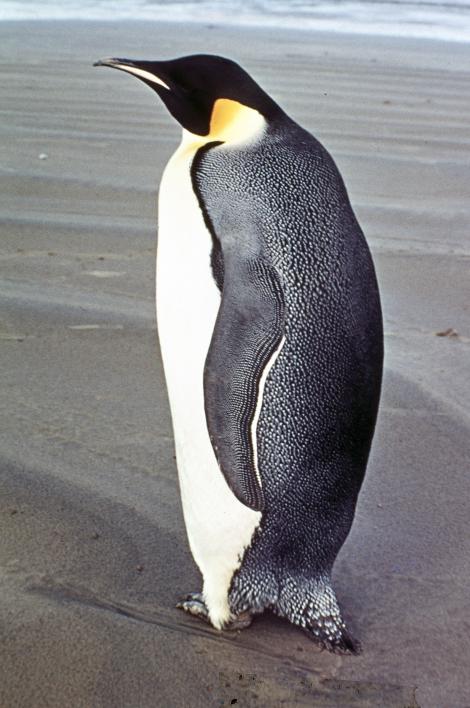 Emperor penguins are superlative birds. The largest penguin, they are the only bird that breeds in the depths of the Antarctic winter, and they can dive deeper (500 m) and survive longer without eating (4 months) than any other bird. Emperor penguins are also the only bird species that breeds on ice, and one of the few birds that doesn’t build a nest – the male balances the egg on top of his feet. When combined with their stunning good looks and ridiculously cute chicks, it is little wonder that emperor penguins command so much attention.

Emperor penguins are very large penguins that could only be confused with the related, smaller king penguin. They are dark silver-grey on the back, and white on the breast and belly. The diagnostic broad pale patch on the side of the neck is yellow in adults and dull white in juveniles. Adults have a black head and chin, while juveniles have a chin colour that may vary from white to dark grey. The slender, decurved bill has a pink stripe on the lower mandible (paler in juveniles). Recently fledged chicks are about half the size of adults.

Similar species: king penguin is smaller and more brightly coloured, with a relatively longer bill. The pale neck patch is narrower (spoon-shaped) and dark orange in adults. When swimming, king penguins have smaller, brighter neck patches that do not reach the water, compared to the larger paler neck patch of the emperor penguin that extends to the water line.

Emperor penguins are characteristic and abundant denizens of the Antarctic pack-ice. The 46 known colonies are scattered around the entire Antarctic continent, with almost all colonies located on fast ice (sea ice attached to the land) close to permanent openings (polynyas) in the sea ice. These polynyas, maintained by winds or currents, allow breeding adults to access feeding grounds during incubation and chick-rearing, including when the sea ice is at its annual maximum extent. The world population was estimated at 595,000 breeding pairs in 2009.

Adults are rarely seen beyond the pack-ice, which extends to about 60° S at its maximum extent south of New Zealand. Juveniles tracked by satellite after leaving their natal colonies have been found to swim well north of the pack-ice, up to 54° S. Vagrants have occurred up to 40-41° S off Argentina and New Zealand.

The two New Zealand records are contrasting tales. A bird in adult plumage came ashore on Oreti Beach, Southland, on 5 April 1967, and was released without fanfare off Dog Island, Foveaux Strait, the following day. The second record was an immature bird ashore on Peka Peka Beach, Kapiti coast, 20-24 June 2011, before being taken into care following excessive consumption of sand. This bird became a media sensation (widely known as ‘Happy Feet’), and was eventually released north-east of Campbell Island on 4 September 2011.

The emperor penguin takes the generic penguin feed-and-fast lifestyle to extremes. They lay down extensive subdermal body fat, providing both insulation and energy reserves. This fat allows them to survive weeks or months without feeding during courting, incubation, chick care, moult, and the often lengthy transit between the sea and breeding colonies. As a result, the body weight of emperor penguins fluctuates greatly between about 23 and 45 kg. Males can lose up to 45% of their bodyweight during the 4 months that they are continuously at the colony from the start of courtship (March-April) through to after the egg hatches (July-August).

The single large egg is incubated entirely by the male for 62-67 days, with the female returning to the sea for 2 months until soon after the egg hatches. The egg, and later the young chick, is balanced on its parents’ feet during brooding. This mobile ‘nest’ allows the adults to move around, including forming their famous huddles during severe mid-winter blizzards. Both parents feed the chick through to fledging in December, timed to occur as the sea-ice breaks up in summer.

Breeding adults moult in January-February, with juveniles and non-breeders moulting in November-December, either at colonies or elsewhere on Antarctic continent and sea ice. They first breed when about 5 years old, and have a life span of at least 20 years.

Emperor penguins mainly consume fish, also squid and krill, captured by pursuit diving. Dives are of up to 18 min duration, typically to depths of 50 metres, exceptionally to over 500 metres. Chicks are fed by regurgitation by both parents.

A very tall, stocky black-and-white penguin with a relatively small head, broad pale patches on the side of the neck that are yellow in adults and dull white in juveniles, a slender decurved bill with a pink stripe, a dark silver-grey back, and a white breast and belly. Adults have a black head and chin; juveniles have a white to dark grey chin.

Calls from a pair at colony