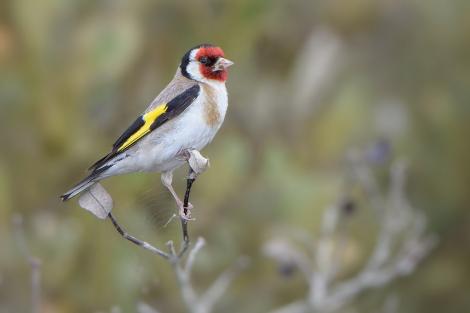 Goldfinches are small finches with flashes of bright yellow and red, common in open country throughout New Zealand. Introduced from Britain 1862-1883, their tinkling calls contribute to the collective noun “a charm of goldfinches”. They are mainly seed-eaters, and often gather in flocks to feed on thistle seed. Goldfinches frequently stray to outlying island groups, and are resident on the Chatham Islands.

Goldfinches are smaller than a house sparrow, with a bright yellow wingbar visible both in flight and when perched. Wings and tail otherwise black (some white spots near tail tip), contrasting with the buff-brown back. Adults have diagnostic bright red, white and black facial feathering. The red is more extensive in the males, especially above and behind the eye. Juveniles have drab brown on the head. Often in flocks (small or large), goldfinches have a bouncy undulating flight.

Voice: a liquid, tinkly calling, often given by flocks in flight. Also a shrill, clear pee-yu.

Similar species: The slightly larger greenfinch also has yellow at the base of the primaries, forming a diffuse patch on the outer wing. All finches have similar undulating flight, but can be distinguished by their calls.

Throughout the country from sea level up to about 500 m altitude, in farmland, orchards, coastal vegetation, riverbeds, plantations and urban areas – almost anywhere other than dense native forest. Goldfinches are locally common on the Chatham Islands, and occur as vagrants on the Kermadec, Snares, Antipodes, Auckland and Campbell Islands. They occur naturally throughout Europe, North Africa, the Middle East and western Asia, and were introduced to New Zealand, Australia, Argentina and Bermuda.

Common and widespread since the 1920s, flocks in the non-breeding season may number several hundred birds.

Goldfinches mainly eat the seeds of introduced weeds, especially thistles. Apart from pecking seeds from uncovered strawberries, they are generally considered neutral or beneficial to the rural economy. They have no recognised impacts on native species. Note that New Zealand has no native finch species. Kakariki parakeets are the only native birds that regularly eat small seeds (other than those encased in fruit); kakariki are now mainly found in forest habitats, where few finches occur.

Monogamous within each breeding season, goldfinch pairs defend a small territory around the nest, with the male singing his pleasant liquid song from a nearby perch. The small woven cup nest lined with thistle down, feathers or wool is usually placed among foliage in an outer fork of a tree, shrub or grape vine. The breeding season from October to February allows time to raise two broods of up to six chicks each (typically 4-5). The male feeds the female on the nest while she incubates and broods the young chicks; both sexes feed the chicks for their final week in the nest, and for the first 2-3 weeks after fledging.

Agile and acrobatic when seeking seeds, goldfinches often hang upside down from seed heads, and flutter from plant to plant. Although they often allow a close approach when feeding, goldfinches generally show little interest in bird food tables, and so are less familiar than house sparrows, silvereyes and chaffinches. Outside the breeding season, goldfinches often occur in mixed flocks with other finches and yellowhammers. Goldfinches specialise in seeking the tiny winged seeds of thistles, and so often occur in single-species groups among a larger flock. Goldfinches have quick, short life-cycles, potentially producing ten or more young per season, and breeding at one-year-old. They are not considered migratory, but there is probably altitudinal movement in response to food availability. Reports of small flocks crossing Cook Strait have yet to be confirmed by band recoveries. Full song is mainly given October-March.

Forage on ground and at all levels of vegetation, usually in small flocks. Diet predominantly weed seeds, supplemented by small invertebrates especially during the breeding season, when they are fed to the growing chicks. Important food items include seeds of thistles, pigweed and fat hen (Chenopodium spp.), dandelion, chickweed, Poa annua, ryegrass, paspalum and other grasses.

A small songbird with bright yellow wingbars, black wings and tail, a buff-brown back, and pale legs and conical bill, in which adults have bright red, white and black facial feathering, and juveniles are drab brown on the head. Often seen in flocks, goldfinches have a bouncy undulating flight accompanied by frequent liquid, tinkly calling.