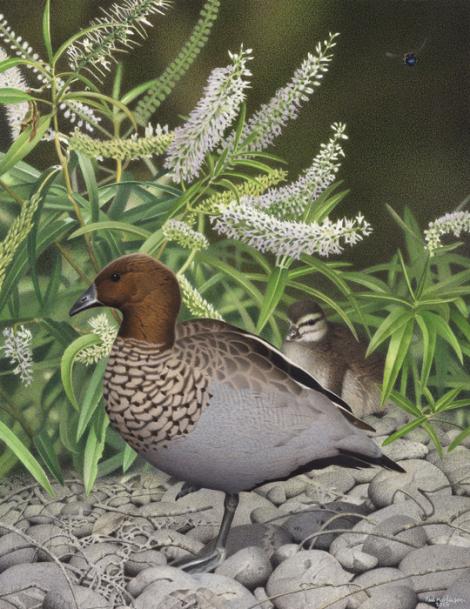 Finsch’s duck was probably one of the most abundant and widely distributed ducks during New Zealand's Pleistocene glacial period. It was herbivorous and terrestrial, inhabiting grassland, scrublands or open forests and with little association with wetlands or lakes. It was stout, thick-legged and had become progressively flightless since its first colonisation from Australia. Finsch’s duck was first described from a fossil deposit from the Earnscleugh Cave in central Otago.

Finsch’s duck was similar in size to a mallard duck, with thick legs suitable for a terrestrial lifestyle, and reduced wings. It was flightless, or near so. The bill was short and stout; comparative measurements of the nasal cavity and orbit (eye socket) with closely related species suggest that it may have relied on its sense of smell, more than its eyesight.

Of the few feathers found, most are silvery-greyish and most have vermiculations, but at least one is a more even grey with a black spot at each distal corner, very similar to the feathers on the breast of male Australian wood ducks (Chenonetta jubata).

Finsch’s duck was common and widespread throughout the eastern drylands of the North and South Islands, where rainfall was below 1200 mm. In the South Island, it was distributed from Marlborough to the shores of Foveaux Strait with a more patchy distribution in areas with wetter climates, where scattered population lived in upland or river flat grasslands.

Because of its abundance, Finsch’s duck is thought to have been an important dietary component of the two large extinct raptors: Haast’s eagle and Eyles’ harrier, and possibly also of the extinct adzebills (Aptornis). It has been suggested that Finsch’s duck became reduced in range and population before human settlement. Extinction occurred after Polynesian settlement but there is uncertainty whether they persisted into European times. An unconfirmed report from behind Opotiki during European times described a “ruffus” coloured bird which may have been a Finsch’s duck. Finsch’s duck was probably extremely vulnerable to egg predation by Pacific rats, and they were hunted by early Maori. Polynesian rats may have competed for food. While their grassland and dryland habitats were highly modified by burning following human settlement, there is uncertainty regarding whether Finsch’s duck would have benefited from the subsequent changes to their grassland habitat.

Abundant bone deposits of Finsch's duck have allowed analyses of changes in body proportions over time. These revealed a progressive reduction of wing length by 10% between the Late Glacial (12,000- 10,000 years ago) and the late Holocene (1800 years ago), associated with a reduced ability to fly.

It is likely that Finsch’s duck bred in hollows, tree trunk or fallen logs because these are the preferred breeding locations of the Australian wood duck, its nearest relative.

Finsch’s duck was most likely a grazer and browser of vegetation, probably mixed with fallen fruit and some invertebrates.

A stout extinct duck species similar in size to a mallard duck with thick legs, a short stout bill and reduced wings, indicating it was flightless or near so.