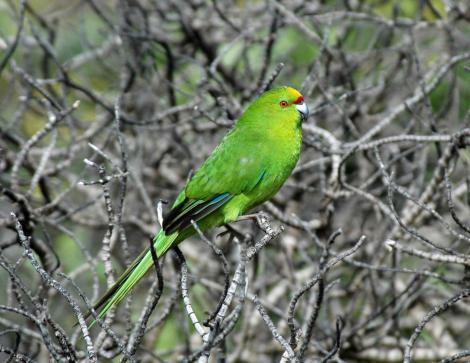 Forbes’ parakeets are medium-sized, long-tailed parrots with broad, rounded wings and predominantly emerald green plumage. They have a bright yellow fore-crown and a crimson frontal band that does not extend to the eye (cf. red-crowned parakeet). Males are larger than females.

Forbes’ parakeets were historically threatened by extensive habitat modification and predation by feral cats. They were reduced to extremely low numbers by the 1970s (< 75 birds). More recently, Forbes’ parakeets have hybridised with Chatham Island red-crowned parakeets, jeopardising the genetic integrity of the species. Recent conservation initiatives such as extensive reforestation, provision of nest boxes and management of Chatham Island red-crowned parakeets and hybrids on Mangere Island has resulted in significant improvements in both habitat quality and parakeet numbers. Forbes’ parakeets are now common on most parts of Mangere Island, and there are plans for their introduction into pest-free habitats on Chatham Island.

Forbes’ parakeets have an extended breeding season, with eggs laid between October and March. They are cavity-nesters, preferring hollows in trees but also using rock crevices and under dense vegetation. The average clutch size is 5 eggs. Like all other Cyanoramphus parakeets, females are responsible for nest preparation, incubation, brooding and feeding of chicks until 10-14 days of age. During this period all her food is provided by her mate. Thereafter, male and female parakeets feed chicks at the nest until they fledge.

Incubation usually commences after the second egg is laid, resulting in chicks within a brood varying greatly in age and size. The last chicks to hatch out usually fledge at an earlier age and are less developed than their older siblings. More than one brood may be attempted if the initial nest fails or if food supply allows.

Forbes’ parakeets occur at higher densities in forest and in areas of dense regenerating vegetation than in open grassland. Despite their rather erratic flight they are strong fliers and readily move between Mangere and Little Mangere Islands. Individual Forbes’ parakeets have occasionally been observed in the southern forests of Chatham Island (>20 km from Mangere Island) and on nearby Pitt and Rangatira Islands. Their social behaviour is similar to other species of Cyanoramphus parakeets. They are strongly territorial around nests, calling loudly and chasing intruders from vicinity.

Food items consumed by Forbes’ parakeets are affected by seasonal availability, and include seeds, flowers and leaves from a variety of plants, with invertebrates more important in spring. They forage extensively on the ground in more open areas.

A medium-sized long-tailed parrot with broad rounded wings and mainly green plumage. It has a bright yellow fore-crown and a crimson frontal band that does not extend to the eye.

Birds near the hut (surf in background)