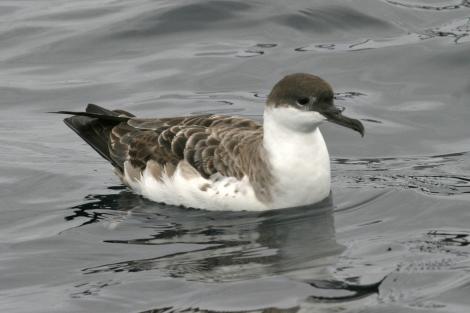 Great shearwaters breed in the South Atlantic Ocean on Gough Island, Inaccessible and Nightingale Islands (Tristan da Cunha group) and there is a small colony in the Falkland Islands. They range widely from the breeding islands, mainly migrating to the North Atlantic, but occasionally in the eastern Pacific, rarely as far north as Alaska. Great shearwaters are a summer visitor in the southern part of Chile, especially near Cape Horn and in the Straits of Magellan, and as vagrants to the central coast of Chile.

Up until 2006 there had been only eight records of great shearwaters from the southwest Pacific Ocean, with no accepted records from New Zealand. Following the first confirmed New Zealand sighting, in the Chathams Islands at the end of 2006, there has been a spate of sightings around New Zealand, and also off Australia. It had been suggested that great shearwaters move across the South Pacific Ocean and into Australasian waters, but equally they could move east across the southern Indian Ocean.

The great shearwater is a large brown-above and white-below shearwater. It has a dark cap to below the eye, a conspicuous pale collar, prominent white scalloping or fringing of feathers on the mantle and scapulars, dark flight feathers and tail, a grey back and a diagnostic white crescent at the base of the tail. The undersides are white except for a brown patch on the belly. The underwings are mainly white, with variable dark markings. The bill is dark grey, the eye is dark, and the legs are pinkish-grey.

Voice: great shearwaters are silent at sea. They are noisy on their breeding grounds giving a variety of wailing and braying calls, similar to sooty shearwater.

Great shearwaters are mainly found in the South Atlantic and south-western Indian Oceans, over southern sub-tropical and subantarctic waters, and migrate to the North Atlantic during the southern winter. To date all records in New Zealand waters have been of single birds.

The great shearwater is a pelagic trans-equatorial migrant. Where common, they rest and feed in rafts on the sea’s surface, and regularly follow ships and trawlers. Great shearwaters often feed in flocks, catching prey at the surface by surface-seizing, or underwater by pursuit plunging or pursuit-diving.

A large brown-and-white shearwater with a dark cap to below the eye, pale collar, white fringing on the mantle and scapulars, dark flight feathers and tail, grey back and white crescent at the base of the tail. The underparts are white with a brown patch on the belly, the underwings are mainly white with variable dark markings, the bill is dark grey, the eyes are dark, and the legs pinkish-grey.

Aggressive calls by adult in burrow