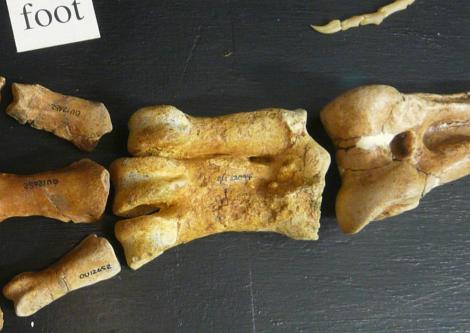 Grebneff’s penguin is known from two skeletons: the holotype was found in the Waipati catchment of the Maerewhenua River near Duntroon, north Otago; and a referred specimen from the bank of the Waihao River, South Canterbury. The Waihao River is also the type location for both the Waitaki penguin and Maxwell’s penguin.

Grebneff’s penguin was apparently slightly larger than the Waitaki penguin, and had a straight tip to the upper beak among other skeletal differences. It was estimated to stand about 1.3 metres tall when in a relaxed pose, and any estimates of fossil penguin heights taller than this need to be taken with a large grain of salt.

The holotype skeleton (OU 22094) and referred specimen (OU 22065) are held in the Geology Museum, University of Otago. The genus name means ‘food-diver’, based on Māori ‘kai’ (food, eat) and ‘ruku’ (dive), with the connotation of returning with food. The species name honours Andrew Grebneff (1959-2010), paleontologist and specimen preparator at University of Otago from 1985-2010.