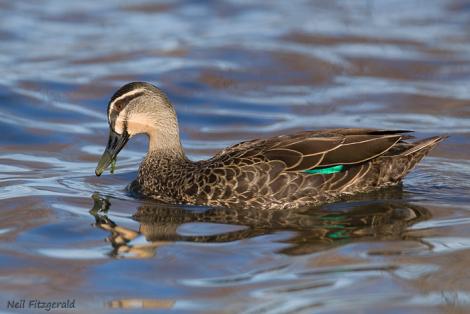 The New Zealand grey duck population is believed to be extensively hybridised with introduced mallards to such an extent that few pure grey ducks may now exist, hence its “critical” conservation status. While this presumption is based entirely on phenotype, as definitive genetic studies have yet to be undertaken, the diversity of soft part and plumage characteristics of most grey duck-like New Zealand birds compared to those in Australia lends support to this belief.

Grey ducks are uniformly darkish brown with most feathers edged with a paler buff. The crown is almost black, and the face a clean cream crossed with two sharply-defined black stripes, one extending from the bill through the eye to link to the dark crown, the other from the gape and extending across the lower face and beyond the eye. The bill is leaden grey with a black nail, legs khaki, and the eye dark brown. The upper wing is brown, with the speculum (on the trailing edge of the inner wing) an iridescent green with a trailing narrow white band (and no anterior band). The underwing is white. The sexes are alike, but males are 5-10% larger than females.

Voice: females give a typical decrescendo call of about 6 loud quacks in a row, soft quacks in communication with ducklings, and a rapid “gag gag gag” repulsion call in courting displays and when pursued by males. Males give soft “raeb raeb” call of variable length.

Similar species: grey ducks are easily confused with female mallard from which they can be distinguished by: mallards have bright orange legs and feet, orange-and-brown bills, more diffuse eye and bill stripes and mottled face, and a blue speculum edged with white both at front and back. Hybrid grey x mallard ducks are confusingly variable in most characteristics and otherwise “good” grey ducks need to be examined closely for any indication of anterior speculum stripe (alar bar) on wing (white or fawn, narrow or wide…if it is visible it is probably of hybrid ancestry), hints of orange on legs, and “dirty” cream face with indistinct edges to the facial stripes.

Grey ducks were formerly found throughout all of New Zealand, including on all vegetated subantarctic islands, Chatham Islands and Kermadec Islands. They have disappeared from all subantarctic islands, and are now rare on the Chatham Islands and much diminished on mainland New Zealand. The 1999-2004 Ornithological Society of New Zealand atlas scheme showing grey ducks to still be widespread is erroneous and clearly confused grey duck with hybrids and mallards.

The best opportunity to view grey duck is in forested headwater catchments and away from human settlements (where mallards and hybrids occur), in Northland, West Coast (South Island) and Fiordland.

Pure grey ducks are now considered rare but no credible population estimates have been made.

Although critically rare it remains a gamebird and can be legally hunted during the annual waterfowl season (May-June). Because of its similarity to mallard both on the wing and in the hand, as well as uncertainty about characteristics of hybrids, only a cessation of all duck hunting will prevent it from being shot.

Grey ducks are seasonally monogamous, with all incubation and duckling care contributed by the female. During the breeding season they are dispersed on ill-defined territories where the male’s defence is more concentrated on female protection and guarding rather than of space. They lay mainly during August to October. Nests are situated on the ground under cover or in tree forks or epiphytes, the bowl being accumulated debris at the site lined with plucked breast feathers and down. The clutch of 8-10 whitish to pale green eggs is incubated for 26-29 days. The ducklings leave the nest as soon as the brood is dry, and accompany the female for about 7-9 weeks, but feed themselves from the outset. Grey ducks can breed in their first year.

Grey ducks are nowadays typically associated with undisturbed waters rather than those in close proximity to human activity. Remote lakes and headwater rivers with forested or scrub fringes are preferred. They may occasionally occur in flocks with mallards but are usually encountered as singles or in pairs, and are timid and easily spooked. Grey ducks disperse widely, but mostly occur in “wild” rather than pastoral landscapes.

The grey duck is a wetland feeder (cf. mallard also on dry land), consuming mostly plant material, including seeds and soft tips of most aquatic plant species. Animal foods, which make up about 10% of the diet, include a wide range of insect larvae and adults, freshwater snails and worms.

A large darkish brown duck with a grey bill, khaki legs, dark brown eyes, and pale buff-edged body feathers. The face is a warm buff colour with two well-defined black stripes and the upper wing is brown with an iridescent green speculum with a trailing narrow white band.