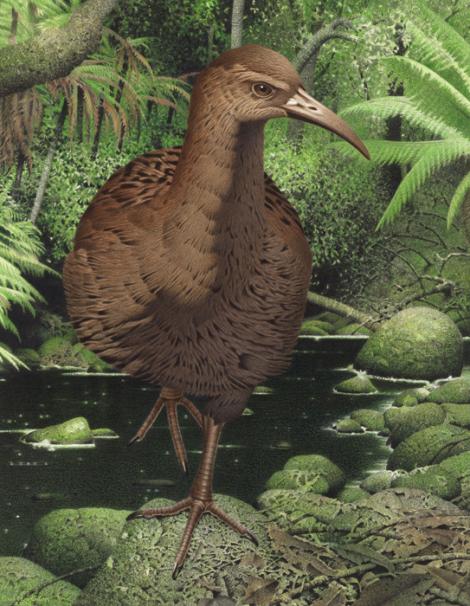 The recently extinct Hawkins' rail was a large weka-like bird with a long down-curved bill. It is the only member of the genus Diaphorapteryx. Hawkins' rail is part of the vast radiation of rails that spread across Oceania, speciating into new taxa on many islands. Most of these rails were flightless species and were wiped out due to human colonisation. Although the only known specimens of Hawkins' rail are fossil bones, there are brief written accounts suggesting that the species survived into the 19th century. The first specimen described was a skull brought to the Canterbury Museum in 1892 by William Hawkins, after whom the species was named.

No detailed description of the plumage of Hawkins' rail was ever recorded, and no feathered specimens are preserved, so little detail is known about its colours. However bones and brief accounts indicate that it was a large reddish-brown rail with a disproportionately long down-curved bill about 10 cm long. Males were considerably larger than females, with bills at least 2 cm longer. A single bill plate fragment is also coloured reddish-brown. Several complete skeletons exist and show that its wings were very small and that it was certainly flightless.

Voice: two accounts state that it had a powerful strident call, like Tue-ck, that could be heard at great distances.

Hawkins' rail is known to have occurred on the two largest islands in the Chatham group. Holocene fossil bones of the species have been found commonly on main Chatham Island and also on Pitt Island. One brief account suggests that Hawkins' rail occurred in open areas known as "The Clears". If its habits resembled those of the weka, it was likely to have been widespread in most terrestrial habitats.

Nothing is known about the former population size of the species, however, the abundance of its bones suggests that it was once relatively numerous.

Hawkins' rail is known from Moriori food middens and is thought to have become extinct as a result of human hunting, possibly combined with predation from various introduced mammals. The level of detail recorded in late 19th century accounts suggest that the species may have persisted into the early European era, i.e. early 1800s. These accounts document two Moriori hunting methods of capturing roosting or nesting birds. As the birds apparently always walked with their heads down pecking, hunters could approach them quietly from the front and, before being noticed, simply grab the birds by the neck and strangle them; however, anyone approaching from behind or from the side was quickly detected and the birds would escape. The other hunting method involved observing roosting sites, making long tracks up to the sites, carefully removing any sticks or obstructions which might alarm the birds by cracking, then sneaking up quietly and "making a stealthy rush" to pounce on and kill the whole group.

Nests were never described, but nesting sites were apparently sometimes found among vegetation in relatively open areas known as "The Clears".

Hawkins' rail had robust legs and long toes to suit its ground-dwelling lifestyle. It is likely to have filled a similar ecological niche to weka on mainland New Zealand. Hawkins' rails are reported to have sometimes slept together in roosting or family groups - "six or eight" huddled together "like pigs in a bed".

One account said that the species "kept its head continually on the ground looking for food, chiefly fernroot, which it burrowed for and dug out with its powerful bill, making, it is said, a rooting like a pig". It was also reported to peck decaying wood on the ground. As its bill was longer and more curved than that of a weka, it may have been less predatory than that species, but ground-nesting birds, lizards and invertebrates are likely to have made up part of its diet.