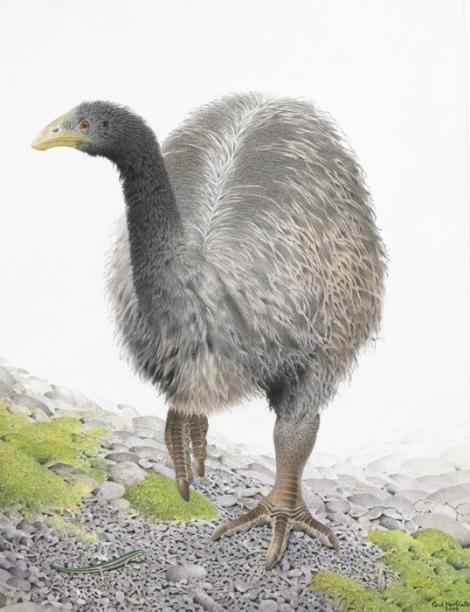 The heavy-footed moa was restricted to the South Island, where it was common in lowland forest, shrubland edges and wetlands in Canterbury, Otago and Southland. As its Latin name suggests, the heavy-footed moa was a mammoth moa species, complete with shaggy hair-like feathers, a long trunk-like neck, and elephantine feet. It was the heaviest moa species relative to height, and laid the second largest moa eggs yet found. Like a woolly elephant, its large bulky body would have helped it bulldoze through vegetation, and its large size and shaggy feathers would have helped it cope with cold temperatures. A large olfactory chamber suggests it had an acute sense of smell, which may have been an adaptation for a partly nocturnal life. Study of feathers from mummified remains suggests that heavy-footed moa had speckled patterning similar to the upland moa, or they were plain or slightly streaked. They were preyed on by Haast's eagle, and their bones are known from widespread midden sites. All nine moa species became extinct abruptly, 500-600 years ago, as a result of human overhunting. DNA study suggests that moa were more closely related to the flighted South American tinamou than to the kiwi.

The heavy-footed moa was a very bulky, large moa with relatively short but sturdy legs. It had a rounded head, and a long, sturdy, decurved bill with a pointed tip.

Similar species: where their ranges overlapped, the stout-legged moa was about two-thirds the size of the heavy-footed moa.

The heavy-footed moa was common. Its bones are frequently found in natural deposits and midden sites.

The main cause of extinction was overhunting by humans. Moa chicks may also have been eaten by the introduced Polynesian dog (kuri). Burning of eastern dryland forests and shrublands is likely to have reduced the extent of suitable habitat.

Heavy-footed moa laid massive eggs. Three attributed to this species measured about 226 x 158 mm. Little has been deduced about their breeding ecology. Like other moa, the heavy-footed moa is assumed to have bred as isolated pairs, laid a small clutch, and had male-only incubation.

The extremely large olfactory lobes of the heavy-footed moa suggest that it had an acute sense of smell, the function of which is unknown. The three members of the Pachyornis genus had largely non-overlapping distributions, with the small Mantell’s moa confined to the North Island, and the crested moa mainly occurring at higher altitudes than the heavy-footed moa.

Heavy-footed moa consumed branchlets of trees and shrubs, herbaceous plants and flax, the fibrous leaves of the latter having been found among gizzard stones. DNA studies reveal that a wide diversity of herbs and shrubs was consumed, by both browsing and grazing.

A very bulky, large moa with massive feet, relatively short sturdy legs, a rounded head, and a long, sturdy, decurved bill with a pointed tip. Its body had shaggy hair-like feathers and its legs were bare and scaly.