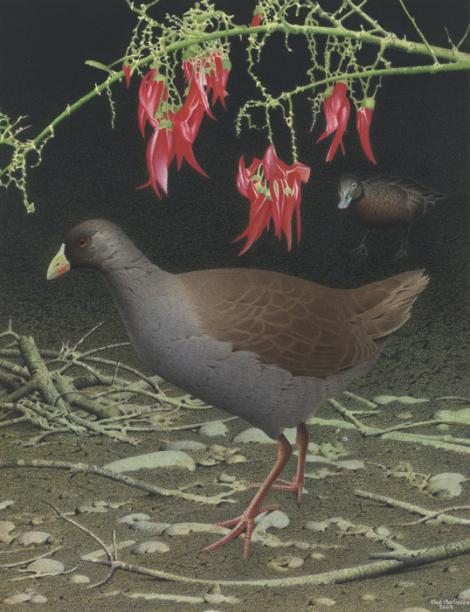 The history of this species has been one of nomenclatural instability, with no fewer than 7 generic and 3 specific names applied to it since its initial description by Ron Scarlett in 1955. It is now agreed that the bird was a moorhen and thus it is placed in the genus Gallinula. This small (250 g), flightless species was present on both the North and South Islands, and was named from bones recovered from the famous Pyramid Valley swamp in North Canterbury. The specific name honours the Hodgen brothers who owned the land on which the swamp is found. The holotype (CM AV6197, an incomplete pelvis) and paratypes are held in the Canterbury museum.

The genus Gallinula comprises 9 extant species of world-wide distribution. All but one of these species have dark, plain plumage and all of them have brightly coloured bills and frontal shields, and so it is likely that Hodgens’ waterhen shared these generic features. It was probably related to the Australian black-tailed native hen, which occurs in New Zealand as a rare vagrant. Unlike the black-tailed native hen, Hodgens’ waterhen was flightless. It inhabited forest as well as wetlands, and was abundant in the forested margins of Lake Poukawa in Hawke’s Bay. It may have been ecologically similar to two other flightless, forest-dwelling gallinules of the south-west Pacific, the Samoan moorhen (G. pacifica) and the San Cristobal moorhen (G. silvestris).

Hodgens’ waterhen was extinct by the 18th Century, a probable victim of egg and chick predation by introduced Pacific rats and hunting by humans. Despite its small size (about a quarter of the body weight of a pukeko), its bones have been found in archaeological middens, indicating that it was taken for food.

A small flightless moorhen species that probably had dark plain plumage and a brightly coloured bill and frontal shield.