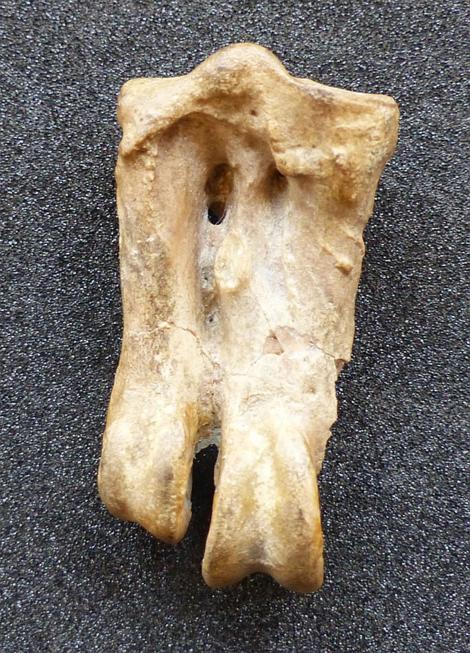 Thomas Huxley described Palaeeudyptes antarcticus from a single tarsometatarsus found at Kakanui, North Otago. The age of the specimen is uncertain, but likely to be about 32 million years old (earliest Oligocene).

This was the first fossil penguin ever named, and it is the type species in a genus now recognised as containing at least four species from New Zealand, South Australia and Seymour Island (off the Antarctic Peninsula). The Palaeeudyptes penguins were very large, with the smallest species being similar in size to an emperor penguin. Huxley’s penguin was one of the larger species.

Several other penguin fossils, including from South Australia and Seymour Island, have been incorrectly assigned to this species over the years. Currently Palaeeudyptes antarcticus is known only from the type locality (Kakanui) and Burnside Quarry (near Dunedin); neither of these specimens includes wing (flipper) bones. The inappropriate alternative name ‘narrow-flippered penguin’ was coined by W.R.B. (Brook) Oliver, who accepted James Hector’s referral of wing and leg bones from Seal Rock, Nelson Province, to this species. Ksepka et al. (2012) considered the Seal Rock specimen to be of an indeterminate genus, and so Palaeeudyptes antarcticus is known from leg bones only. The holotype tarsometatarsus is held in the Natural History Museum, UK (BM A.1084).

The genus name means ancient good diver. The species name is a misnomer, as the type locality is at latitude 45° 12' S.

Hector, J. 1872. On the remains of a gigantic penguin (Palaeeudyptes antarcticus, Huxley) from the Tertiary rocks on the west coast of Nelson. Transactions of the New Zealand Institute 4: 341-346.