Geographical variation: North and South Island sub-species are recognised but this is not supported by genetic data. There is a trend towards greater size from north to south 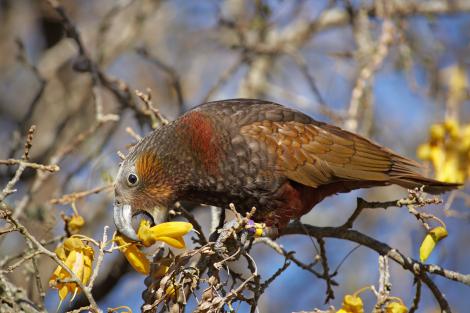 Generally heard before they are seen, kaka are large, forest-dwelling parrots that are found on all three main islands of New Zealand and on several offshore islands. Much reduced in range and abundance in the North and South islands due to forest clearance and predation by introduced mammals, kaka are most abundant on offshore islands that have no introduced mammals, or at least no stoats. They remain locally common at some sites on the main islands that are close to offshore island refuges, and have increased in abundance at others where mammalian pests have been controlled. Kaka can be found in a wide variety of native forest types including podocarp and beech forest. They are a common sight in Wellington city, having spread from Zealandia / Karori Sanctuary.

A large, olive-brown parrot with grey-white crown, red-orange underwing and deep crimson belly and under-tail coverts. Males have a noticeably longer and deeper upper mandible and bigger head than females but this is generally only apparent when the two sexes are seen side by side.

Voice: a harsh, repeated, rhythmic “ka-aa” when flying above the forest canopy, harsh grating “kraak” alarm call when disturbed. Also a variety of loud, musical whistles, but these vary markedly from place to place. Males give a soft “tsee-tsee-tsee” call during the pre-copulatory display and when showing potential nest sites to females. Females soliciting food from their mates, and juveniles soliciting food from their parents, utter a guttural, repeated “aa-aa” call.

Similar species: the only species likely to be confused with the kaka is the kea, which is larger, olive-green rather than olive-brown, and confined to the South Island.

Kaka are rare to uncommon in native forest throughout the three main islands of New Zealand except for areas adjacent to offshore island strongholds such as the Hen and Chicken Islands, Little Barrier Island, Kapiti Island, Ulva Island and Codfish Island. They are also common on Great Barrier and Mayor Islands, and have recovered at some sites where control of mammalian predators is undertaken, such as the Wangapeka valley in Kahurangi National Park, and the Eglinton Valley and Waitutu in Fiordland National Park. Reintroduction programmes have been remarkably successful at a few sites. A large wild kaka flock is a feature at the Pukaha Mt Bruce National Wildlife Centre in the Wairarapa, and kaka are commonly seen throughout the Wellington city green belt, following their reintroduction to Zealandia / Karori Sanctuary. Kaka also visit Auckland and Hamilton cities during winter, but there are few sites there where they are regularly seen.

Probably fewer than 10,000 birds. There appears to be sufficient gene flow between most populations to prevent the development of significant genetic differences between them.

Although forest clearance has destroyed all but a fraction of the kaka’s former habitat, the biggest threat to their survival is introduced mammalian predators, particularly the stoat, but also the brushtail possum. It is predation by these pests, particularly of nesting females, that is the reason for general rarity of kaka on the main islands compared to their forested offshore island strongholds.Kaka can coexist with rats, and possibly also with possums, but not with stoats. Kaka populations can, however, recover when stoats and other pests are controlled by trapping or poisoning.

Kaka mainly breed in spring and summer, but occasional second broods can extend breeding into winter. Nests are generally in tree cavities over 5 metres above the ground, but can be at ground level on offshore islands. The nest floor is lined with small wood chips. The typical clutch size is 4. The female alone incubates the eggs and cares for the nestlings but is fed by the male throughout the breeding season. Both parents feed the fledglings which often fledge before they are able to fly, or even climb, effectively.

Kaka are obligate forest birds that obtain all their food from trees. They are adept fliers, capable of weaving through trunks and branches, and can cover long distances, including over water. Radio-tracking and banding studies revealed that the kaka of the Hen and Chickens, Little Barrier and Great Barrier Islands are effectively one population, even though these islands are separated by as much as 25 km of open water. Kaka congregate at localised food sources such as flowering rata, but often forage alone for wood-boring insect larvae, fruit or seeds. As conspicuous as they can be when in a group, kaka are typically cryptic when alone, often the only thing to betray their presence is the sound of wood or seed fragments dropped by the bird as it forages.

A large olive-brown forest parrot with grey-white crown, bright red-orange underwing and deep crimson belly and under-tail coverts. Males have a noticeably longer and deeper upper mandible and bigger head than females which is apparent when the two are seen side by side.