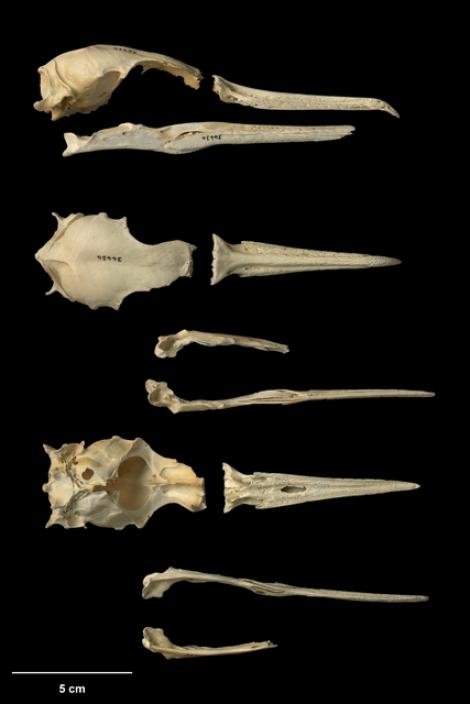 New Zealand is the centre of global diversity for shags and cormorants, with 13 living species. In 2017, a further species, already extinct, was discovered. Fossil shag bones had been known from Northland for decades but the existence of an extinct taxon from there was not suspected. The new species is known only from fossil bones that are up to a few thousand years old. Little is known about the kohatu shag as there are no records of it being seen alive. The scientific name of the species ‘septentrionalis’ refers to it formerly being the northernmost New Zealand member of the genus Leucocarbo, while its common name ‘kohatu’ (meaning ‘from the stone age before our time’) was chosen by Ngāti Kuri whose tribal area includes the area where the shag’s remains have been found.

Fossil bones of the kohatu shag have been found only in Northland sand dunes.

Only a few bones of the kohatu shag have been identified, suggesting that it was never an abundant species. Possibly it had a very restricted distribution but a more detailed examination of shag bones found elsewhere around the North Island is needed to establish the full extent of its original range.

The kohatu shag was probably quickly killed off by hunting. It was a large bird that would have been a useful food source for early human colonisers.

Nothing is known about the breeding biology of the kohatu shag but, no doubt like most of its relatives, it was a colonial nester, laying a clutch of about 2-3 eggs.

Nothing specific is known of the behaviour or ecology of the kohatu shag but it is remarkable that three or four species of Leucocarbo shags once occurred on mainland New Zealand, each with discreet geographic distributions. This suggests that each of these species had/have poor powers of dispersal and strong philopatric behaviour.

Presumably, like its closest relatives, the kohatu shag would have fed close to its colonies and dived to the ocean bottom to catch its food, which would have primarily been fish.