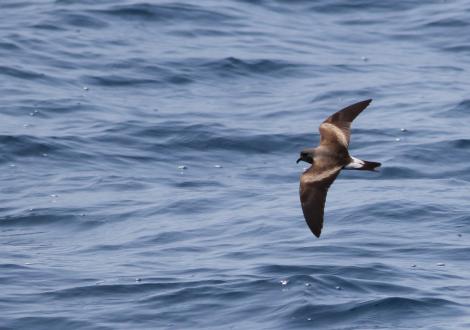 Leach’s storm petrel is a small northern hemisphere seabird that breeds on islands in the North Pacific and North Atlantic Oceans north of 30o N, migrating to tropical and subtropical seas north of the equator. Records of these birds in New Zealand seem a little surprising but they have been found here six times since 1922, including two birds apparently prospecting for nest sites on tiny Rabbit Island, off the north-west end of Pitt Island, Chatham Islands, in 1980, and a pair on an egg on nearby Rangatira Island in 2018.

Leach’s storm petrel is a small brownish-black seabird with a white band across the rump and a diagonal greyish band across the inner part of the upper wing. The tail is deeply forked and the white rump is divided by a fine dark line visible at close range. The legs are short and black, and the bill is also black. In flight the wings are long and more pointed than in the southern storm petrels, and the tail is longer. The flight pattern is also quite different, agile with sudden changes of direction and speed, with tern-like wing beats and shearwater-like glides on down bowed wings. It may also move slowly into the wind with the feet pattering when feeding.

Voice: soft chuckles and purrs in flight and on the ground. One in a burrow on Rabbit Island gave a loud churring call interspersed with ‘ik’ notes.

Similar species: in size and colour Leach’s storm petrel is most similar to Wilson’s storm petrel but is larger with a more slender build with longer, more pointed wings, a longer forked tail and, usually, a different flight pattern. Other black-and-white storm petrels have white under the wings and on the body, and other dark petrels are larger and lack the white rump.

The form of Leach’s storm petrel that reaches New Zealand breeds on islands in the northern Atlantic and Pacific Oceans, extending down to northern California. They migrate to warmer water usually north of the equator but are regular during the non-breeding season off the Cape of Good Hope and Brazil. Elsewhere they are vagrants, apart from about 25 pairs breeding on islands off the coast of South Africa (breeding suspected since c.1971, confirmed in 1996).

Three birds have been washed ashore dead: Muriwai Beach, Auckland (August 1922), Dargaville Beach (August 1978), and Ninety Mile Beach (October 1998). Another was blown inland and found dead at Turangaomoana, near Waharoa on the Hauraki Plains in April 1978. Two live birds apparently prospecting for nest sites were found on Rabbit Island, Chatham Islands in November 1980, and a pair were found on an egg in a burrow near the summit of Rangatira Island, Chatham Islands, in February 2018.

Leach’s storm petrel is globally common with a total population estimated at 20,000,000 that appears to be more or less stable.

Leach’s storm petrels are much more common over deep water than the continental shelf and favour upwellings.

A medum-sized brownish-black storm petrel with a white band across the rump, diagonal greyish band across the inner upperwing, deeply forked tail, and a white rump divided by a fine dark line visible at close range. It has short black legs and a black bill; in flight the wings are long and more pointed than in the southern storm petrels, and the tail is longer.

Adult on nest (other conspecifics in background)

Purring call from adult in burrow