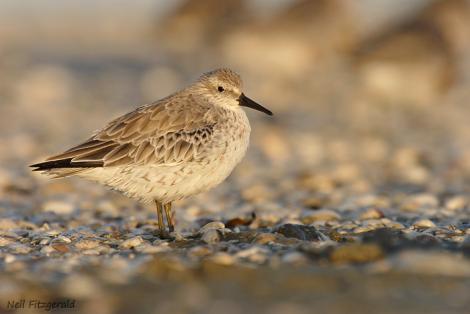 Lesser knots are the quintessential flocking sandpiper, feeding in flocks on tidal flats from the Far North to Southland. Nondescript for much of the year, in February and March they moult into a rich reddish breeding plumage, hence their name used in most of the world, the red knot. The ‘lesser’ name is a comparison with the related great knot.

The lesser knot is a medium-sized wader, plain grey above and white below in non-breeding plumage. The bill is dark and of medium length, and the legs range from yellowish as juveniles to dark grey as adults. The rump is lightly barred white. Juveniles have buffier underparts than adults, and dark subterminal bands on the mantle and scapular feathers. In flight, lesser knots show a pale wingbar on the upperwing. In breeding plumage the mantle and scapulars become variably dark-centred with red patches, and the belly, breast and face become reddish. In the subspecies rogersi the breeding plumage feathers of the upperparts are largely grey-fringed, whereas the subspecies piersmai has more extensively red and black feathering, and a redder hindneck. Lesser knots feed in flocks with a rapid ‘sewing-machine’ action.

Voice: lesser knots are generally quiet. They give a soft chuk while feeding, and a more strident weet-weet before migration.

Similar species: non-breeding great knots are larger, with darker streaks on the breast, clearer ‘vee’ markings on the flanks, a finely streaked forehead, whiter rump, and a longer and heavier bill. Single red knots can, however, be quite confusing, especially when there are no other birds present for size comparisons.

The commonest subspecies in New Zealand, rogersi, breeds on Chukotka Peninsula in far-eastern Russia. In recent years it has become evident that New Zealand also hosts birds of the subspecies piersmai, which breeds further west on the New Siberian Islands. C.c. piersmai winters principally in northern and north-west Australia, while rogersi winters mostly in eastern Australia and New Zealand. Red knots are found widely around the large harbours and estuaries of the North Island of New Zealand (but only a few in the Waikato), but in the South Island good numbers occur only in the northern South Island (especially Farewell Spit) and Southland. They are regular on Chatham Island; vagrant to Kermadec, Auckland, Campbell and Macquarie Islands. Lesser knots are found mainly at sites with extensive sandflats or mudflats. They roost on shellbanks and sandspits, usually with other waders such as godwits.

The East Asian-Australasian Flyway population has probably been overestimated in the past, and there may be fewer than 120,000 lesser knots wintering in Australia and New Zealand. The New Zealand population has declined from almost 60,000 in the early 1990s to about 30,000 in the 2010s. The global population is around 900,000 birds across six breeding regions. About 10% of the New Zealand summer population remains there in winter. These are immature birds aged 1-3 years old.

During their northward migration, lesser knots from both New Zealand and Australia concentrate at Bohai Bay in the western Yellow Sea of China, where tidal flat reclamation pressure is immense. No other major sites are known on migration, and it is likely that the majority of the flyway’s knots occur there. There is extreme concern about the impact of reclamation there on red knots of both subspecies. In New Zealand, while tidal flats are relatively secure, human impacts on roosting sites may be detrimental. The conservation status of this species was changed from Migrant to Nationally Vulnerable in 2013.

Lesser knots breed as monogamous pairs on high Arctic tundra. The clutch of 4 eggs is laid in a lichen-lined depression on the ground, incubation is shared, and the precocial young leave the nest soon after hatching. Chick-rearing is shared to a degree, but one mate (probably the female) leaves the clutch to the other mate before the chicks have fledged.

The lesser knot is a long-distance migrant, but precise details of its migrations in the East Asian-Australasian Flyway are lacking. Birds leave New Zealand through March and early April, and tracking has shown that while some birds migrate direct to China, others make an intermediate stopover in northern Australia or nearby regions (Irian Jaya, Papua New Guinea). Birds migrate up the east Asian coast from Taiwan to the Yellow Sea before heading to their Russian breeding grounds. A similar route is taken on the way south, with some birds moving to eastern or south-eastern Australia before crossing the Tasman Sea to New Zealand. Juveniles appear to visit Australia first before trickling through to New Zealand through the southern summer, or to stay in Australia for a year or so then relocating to New Zealand. Adults arrive in New Zealand from mid-September onwards.

Lesser knots often form dense flocks both on the ground and in the air, and they are known globally for their swirling aerial manoeuvres. In New Zealand they often roost near bar-tailed godwits.

Lesser knots mainly eat small molluscs, especially bivalve shellfish, which are swallowed whole and crushed by a muscular gizzard. Important prey in New Zealand include pipi (Paphies australis), cockles/tuangi (Austrovenus stutchburyi), and nutshells (Nucula hartvigiana). They feed on open flats as well as seagrass beds, feeding principally by tactile means (probing, probably involving a remote pressure sense) but they also peck visually for surface prey such as gastropods. They can feed on small amphipods where prey densities are high enough.

A medium-sized wader that is plain grey above and white below in non-breeding plumage with a dark medium length bill, yellowish to grey legs and a lightly barred white rump. In breeding plumage the mantle and scapulars become variably dark-centred with red patches, and the belly, breast and face become reddish.