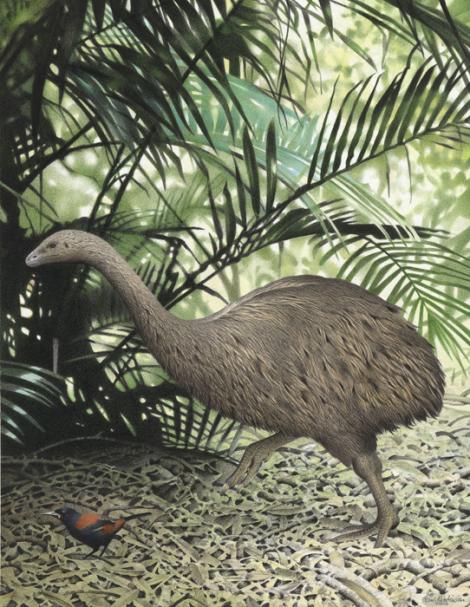 The iconic moa of New Zealand were giant flightless endemic birds grouped in three families, six genera and nine species. They evolved into a wide variety of sizes to become the largest terrestrial herbivores in prehistoric New Zealand. Together they represent the most diverse radiation of any New Zealand endemic bird group, ranging from the small little bush moa to the two giant moa species of the South and North Islands. The nine moa species occurred across a variety of habitat types. All the moa species became extinct abruptly, 500-600 years ago, as a result of human overhunting. DNA study suggests that moa were more closely related to the flighted South American tinamou than to the kiwi.

The little bush moa was the smallest and most widespread moa species, occurring in forest throughout the North and South Islands. Slender with relatively long legs, it inhabited dense forest and shrubland. It was the only species in the genus Anomalopteryx. Its relatively short, sharp-edged bill appears to have been more suited to cutting than those of other moa species. This attribute and the large number of stones typically found in the bird's gizzard, suggest that it had a woody, fibrous diet. It appears to have lived singly or in small groups at a suggested density of one pair per square kilometre. It was probably preyed on by both Haast's eagle and Eyles' harrier in the South Island, and the larger Eyles' harriers of the North Island. Its bone remains are common in archaeological sites near Wellington and Nelson, indicating that it was hunted for food.

The little bush moa was turkey-sized, lightly-built, with a rounded head, a short, stubby, rounded bill, and relatively slender legs. Its legs were bare and scaly, and it had shaggy hair-like body feathers.

Little bush moa occurred throughout the North and South Islands in closed-canopy lowland forest. They were most abundant in the North Island. Remains in the South Island have mainly been found in north-west Nelson and Southland.

Little bush moa remains are common in some archaeological sites near Wellington and Nelson, indicating that it was at least locally common.

The main cause of extinction was overhunting by humans for food. Moa chicks may also have been eaten by the introduced Polynesian dog (kuri).

Field research and DNA study suggests moa nests were similar to those of Australian emu and cassowary, and were built on the ground or in rock shelters. Little bush moa nests have been found in rock shelters in the North Island. Limited evidence suggests moa bred in solitary pairs, rather than colonies, the female laying probably one or two eggs per breeding season. The relatively large eggs (likely to have been about 165 x 119 mm) in comparison with body size suggest a long incubation period, probably exceeding two months. The male is thought to have incubated the eggs, as is the case for most other ratites.

Little bush moa lived in wet rainforests, and were probably preyed on by both Haast's eagle (South Island only) and Eyles' harrier. They probably took up to eight years to reach adult size.

A lightly-built turkey-sized moa with a rounded head, a short rounded bill, and relatively slender legs. Its body had shaggy hair-like feathers and its legs were bare and scaly.