Geographical variation: Subfossil little spotted kiwi from the northern North Island were genetically distinct, and represented a recently extinct lineage which may have warranted species status. 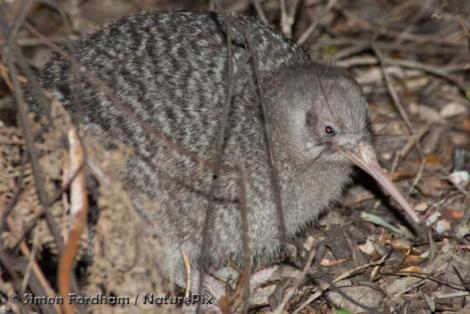 Formerly widespread in forest and scrub on both the North and South Islands. By the time of European settlement they had virtually disappeared from the North Island, with only one specimen collected (Mt Hector, Tararua Range, 1875) and another reported from near Pirongia in 1882. Still common in Nelson, Westland and Fiordland through to the early 1900s, but gradually disappeared, leaving a small relict population on D’Urville Island. It is believed that five little spotted kiwi were introduced to Kapiti Island from the Jackson Bay area in 1912, and they flourished on the island. Since 1983, birds have been transferred from Kapiti to establish new populations on Hen, Tiritiri Matangi, Motuihe, Red Mercury, Long (Marlborough Sounds), Chalky and Anchor Islands, and to Zealandia/Karori Sanctuary (Wellington). Two D’Urville birds were transferred to Long Island (Marlborough Sounds).

Little spotted kiwi died out in the North Island in the late 1800s, possibly as a result of predation by dogs. The decline and ultimate extinction in the South Island was probably the result of predation by mustelids, dogs and cats. Luckily, a few birds were introduced to Kapiti Island in 1912, where they flourished despite the presence of weka. Transfers to other pest-free sites have been largely successful. Little spotted kiwi have the lowest genetic diversity of the five kiwi species, which is not surprising given that the current population is foundered from a maximum of 7 birds, and most likely just 5 birds introduced to Kapiti Island.

Eggs are laid from July to January. The nest is in a short burrow, hollow log, or on the ground under dense vegetation. Clutch size is 1 or 2 large white eggs. Incubation is by the male only.

Little spotted kiwi are flightless and nocturnal. During the day they rest in a burrow, rock crevice, hollow log, or under dense vegetation, and then emerge shortly after nightfall. They feed by walking slowly along tapping the ground and when prey is detected they probe their bill into the leaf litter or a rotten log, or pick prey up from the surface; only rarely plunge their bill deep into the ground. Little spotted kiwi call occasionally each night to advertise territory and to maintain contact with partners; often pairs will duet. They are fiercely territorial, and fight conspecifics with their sharp claws, resulting in a cloud of feathers on the ground.

Jolly, J.N. 1989. A field study of the breeding biology of the little spotted kiwi (Apteryx owenii) with emphasis on the causes of nest failures. Journal of the Royal Society of New Zealand 19: 433-448.