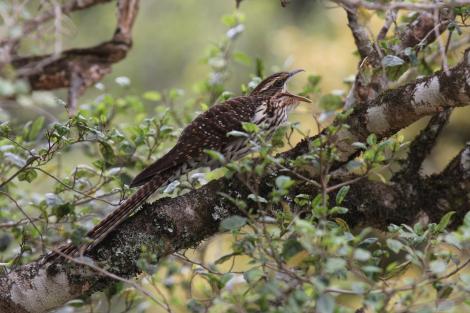 The long-tailed cuckoo is a summer migrant to New Zealand. It mainly frequents forest, so is often difficult to observe closely. In flight its long tail (as long again as its body) makes it unmistakable, and its harsh screeching call is another point of distinction. Two intriguing aspects of its life history are its brood-parasitic habits and the long annual trans-oceanic migration. It breeds only in New Zealand.

The long-tailed cuckoo is by far the larger of the two common cuckoos in New Zealand. It is brown and paler below, with bars, streaks and spots all over. The back and scapulars of adults are dark brown with numerous red-brown transverse bars; in immatures the back is dark brown with numerous large rounded cream-coloured spots. The breast and belly of adults are white with dark brown longitudinal streaks (usually thick); in immature birds, the underparts are suffused lightly to intensely with pale brown, and the dark brown longitudinal streaks are usually thinner than they are in adults. The sexes are alike.

Voice: the principal call is a loud piercing, rising screech or shriek zzhweeep, often followed by a strident pe-pe-pe-pe-pe-pe-pe. Calls may be given at night as well as by day, including in flight by migrating birds.

Similar species: long-tailed cuckoos in flight have a superficial resemblance to a falcon. An adult New Zealand falcon has a relatively shorter tail (less than body length), a dark, strongly-hooked bill with yellow cere at its base, a prominent dark moustachial stripe on the cheek, and rufous flanks, thighs and undertail. Juvenile falcons are dark-plumaged, and unlikely to be confused with a cuckoo.

Long-tailed cuckoos can occur throughout New Zealand when migrating, otherwise they mainly occur in extensive native or exotic forest or scrub holding one or more of their three host species, on Little Barrier Island and from Waikato south. They are present in spring, summer and autumn only, either breeding or on passage to or from breeding locations. Birds seen in farmland or urban areas, where there are no host species, will be birds on passage. They are regularly seen on Raoul Island (Kermadec Islands), and are occasionally reported on the Chatham Islands and the Snares Islands, which is the southernmost record. Records of over-wintering birds are rare. During winter, long-tailed cuckoos occur in an arc of Pacific islands extending 11,000 km from Palau (Micronesia) in the west to Henderson Island (Pitcairn group) in the east. They have not been recorded in Australia or the main island of New Guinea.

To report sightings (or 'hearings') of long-tailed cuckoos, to contribute to a study of their migration patterns, click here.

Common in season at breeding locations. No population estimates or densities available.

The decline of yellowheads in both numbers and range has presumably caused a similar serious decline in the long-tailed cuckoos that were specialised in parasitising them. Despite six successful translocations of whitehead, the North Island host species, to e.g. Tiritiri Matangi Island, Mana Island and Zealandia/Karori Sanctuary dating back to 1989, long-tailed cuckoos have yet to recolonise any of these sites as breeders, suggesting that immature birds recruit to the near vicinity of where they were raised, rather than seeking new host populations.

Long-tailed cuckoos are medium-sized diurnal birds with a strong, slightly down-curved bill, and aggressive predatory habits. They are vaguely raptor-like in flight and may be mobbed by smaller birds. They may call at night during migration. Long-tailed cuckoos are usually first seen or heard in September or October when they rapidly spread to forested areas throughout the country. Eggs are laid mostly in November and December, in the nests of three related species of song-birds, after which the adult cuckoos take no further part in breeding. Adults migrate north in February and March. Young cuckoos are dependent on their foster-parents for several weeks after fledging and their migration north is mainly in April and May, several months after the adults have departed. Immature cuckoos, with their brown-coloured underparts, dominate the cuckoo population in autumn, whereas in spring all birds returning to New Zealand are in adult plumage (body white below with dark brown streaks). There has been no detailed study of the breeding of long-tailed cuckoos, and many details of the eggs and young are poorly known.

Calls from bird at roadside (silvereyes, bellbird & blackbird in background)

Typical call, with other long-tailed cuckoo calls in background

Full call, including both characteristic call types (bellbird in background)