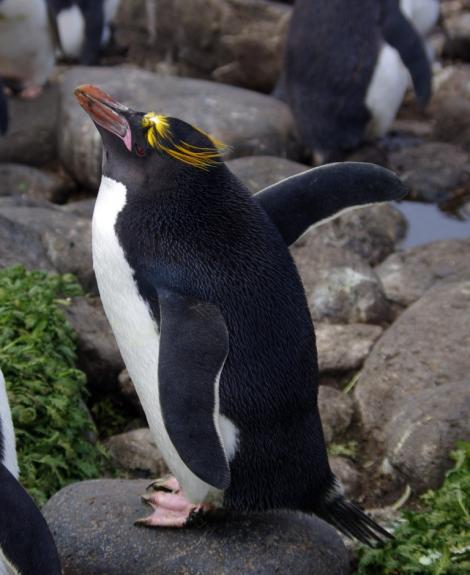 The macaroni penguin is one of the eight species of crested penguins. It is most closely related to the royal penguin, and shares the same scruffy golden yellow crest feathers, that meet on the forehead, quite unlike the paired eye-brow stripes of all other crested penguins. The species was given its name by 19th century sailors after members of the ‘Macaroni Club’, a pejorative term for young men with outlandish tastes or fashion sense. DNA analysis indicates that the macaroni penguin split from the royal penguin approximately 1.5 million years ago.

The macaroni penguin and royal penguin are the largest crested penguins, and both have foppish orange-yellow masses of crest feathers that meet on their foreheads (cf. all other crested penguins). The macaroni penguin differs from the royal penguin in having a blackish face (cf. white or pale grey in the royal penguin). The macaroni penguin has a black head, throat and back, sharply contrasting with the silky white underparts. The flippers are long and blue-black with a white trailing edge on the upper surface, and white underneath. It has a large, robust orange bill with prominent fleshy pink skin at the gape. The eye is red-brown, and the legs and feet pink with black soles.

Similar species: the royal penguin is identical apart from the white or pale grey face. It is unknown whether occasional dark-faced birds among royal penguin colonies are colour variants or vagrant macaroni penguins. The erect-crested penguin is almost as large, and also has a black face and long, robust orange bill, but has paired crests that do not meet on the forehead.

Macaroni penguins are an abundant breeding species on islands situated close to the Antarctic convergence (Polar Front) in the Atlantic and Indian Ocean sectors of the Southern Ocean. South Atlantic breeding sites include South Georgia, and South Sandwich and South Orkney Islands, with populations in the Falkland Islands and southern Chile also. In the Indian Ocean sector macaroni penguins breed on Crozet, Kerguelen, Marion, Prince Edward, Heard and McDonald Islands. There are no populations in the Pacific sector, where the macaroni penguin is replaced by the closely related royal penguin, and further north by the erect-crested penguin (the next largest crested penguin).

The macaroni penguin is a social nester, congregating in very large breeding colonies. Territories are established by males in late October just before females arrive. Courtship is intense with the birds displaying mutual head movements, vocalisation and preening. Usually two eggs are laid but the smaller first egg is rejected when the larger second egg is laid. The majority of the care of the chick at the nest is done by the male. The chicks fledge in February to early March, then the adults moult in April-May, after which birds return to sea until October.

Apart from coming ashore for breeding and moulting, the macaroni penguin spends the rest of its life at sea. Predators at sea include leopard seals, fur seals and orca. Skuas and giant petrels take some eggs and chicks.

The diet of the macaroni penguin consists of krill, fish and squid. During breeding, the female does most of the foraging until the end of the guard stage, provisioning the chick approximately every two days. Both adults feed the chick for the last 6-7 weeks before it goes to sea. Outside the breeding season, macaroni penguins range over long distances foraging for food. They have been recorded diving up to 100 metres depth, but most dives are much shallower..

A tall, portly black-and-white penguin with a black face, an enormous orange bill with prominent pink skin at the base, red-brown eyes, pink legs and feet, and foppish orange-yellow crest feathers that meet on the forehead. The black head, throat and back sharply contrast with the silky white underparts.