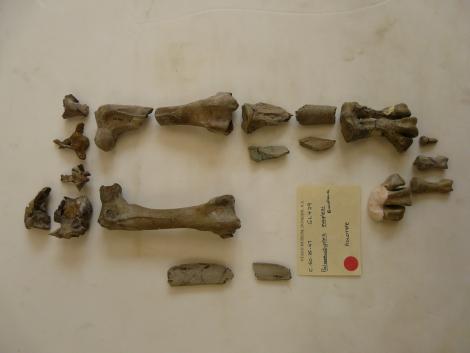 Pierce Brodkorb of the University of Florida, Gainesville, described Marples’ penguin from an associated part skeleton found at Burnside, near Dunedin. The specimen is considered to be of early Late Eocene age (38-36 million-years-old).

The Palaeeudyptes penguins were very large, with the smallest species being similar in size to an emperor penguin. Marples’ penguin was the largest member of the genus. A specimen from South Australia that Brodkorb assigned to this species was subsequently referred to Palaeeudyptes sp. Given the similarity to the slightly smaller and more recent narrow-flippered penguin, the two species may be best considered as a single species that decreased in size over time.

The holotype (OM C.50.25-47) is held in Otago Museum. Although numbered separately, the bones (which include parts of an ulna, two femora, a tibiotarsus, two tarsometatarsi , a fibula, several phalanges and several vertebrae) are likely to be from a single individual.