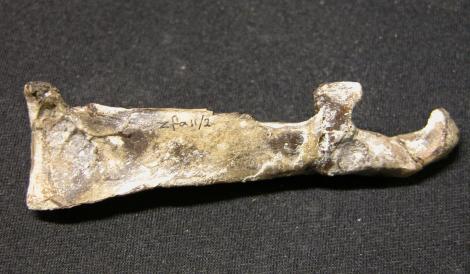 Moisley’s penguin was the first fossil penguin to be named from the North Island. William Moisley found the first fossil above Te Reinga Falls on the Wairoa River, Hawke’s Bay in 1973, and donated it to Canterbury Museum in 1981. Ron Scarlett considered the fossil bones to be similar to the extant penguin genus Spheniscus (found in South America, Galapagos Islands and South Africa), but proposed a new genus for them. The genus name is derived from the type locality and Greek ornis (a bird), and the species name honours the discoverer and donor of the fossil.

Moisley’s penguin was slightly smaller than a Fiordland crested penguin. It is estimated to have lived during the Pliocene (3.6-3.0 million years ago). The holotype (CM Zfa-11) is comprised of at least nine associated bones, and is held in Canterbury Museum. A second specimen (a humerus and a coracoid) from Waihi Beach, Hawera, Taranaki was described in 1987.

These fossils are now considered unidentifiable to genus or species, as they could be examples of either or both genus Eudyptes (crested penguins) or genus Megadyptes (yellow-eyed penguins). The names Tereingaornis and T. moisleyi were therefore determined to be nomina dubia by the Birds New Zealand Checklist Committee in 2022, and have been removed from the New Zealand list. It is likely that some or maybe all of these specimens were of the bird now known as Eudyptes atatu, but the fossils available from the 1980s do not display characters that allow them to be assigned to this genus and species with certainty.