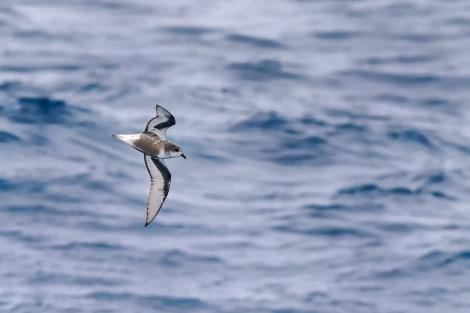 Although the mottled petrel occurs over vast areas of the Pacific Ocean, it is endemic because it breeds only at a few sites in southern New Zealand. During the breeding season mottled petrels are usually seen alone, well offshore off southern New Zealand and even feeding among the pack-ice north of the Ross Sea. After breeding they migrate to the North Pacific and occur as far north as the Bering Sea.

The mottled petrel is a medium-sized petrel with a short black bill, long broad wings, and long, narrow tapering tail. The upperparts are dark grey, with a distinct darker M-marking. The face is mottled grey and white, with a dark patch across each eye. The underparts are white, except for a smudgy grey patch across the lower breast and belly and a prominent black band diagonally across the underwing from the bend in the wing towards the body. The legs and feet are pink with black tips to the webs, but are not usually seen when the bird is in flight. The smudgy grey band across the lower breast and belly is, however, readily seen in flight and is a reliable identification feature for this species.

Voice: mottled petrels are usually silent at sea, but can be very vocal over the breeding colonies at night, especially during courtship. The main call is a rapid ti-ti-ti… or kek-kek-kek…, but they may also give oooi and gorr calls. On the ground they may give the main flight calls and the growling gor-wik call, the latter usually in response to the calls of other birds.

Similar species: the size of the bird with its short black bill and smudgy grey belly and conspicuous black band across the underwing against the otherwise white underparts ensure that this species is readily identifiable and unlikely to be confused with any other species. However in brief or distant observations mottled petrels may be confused with soft-plumaged petrels. The latter species have a smudgy-grey breast band and wholly dark underwings compared with the broader smudgy-grey patch across the lower breast and belly and contrasting black and white underwings of mottled petrels.

Mottled petrels are highly pelagic and are usually seen beyond the continental shelf when away from the breeding islands. During the course of the year the mottled petrel occurs throughout most of the Pacific Ocean. It breeds only in southern New Zealand, primarily on The Snares, Codfish Island and Big South Cape Island, with small colonies on other islands around Stewart Island and in Fiordland. Previously, it bred on inland foothills of both the North and South Islands. During the breeding season (October-May) mottled petrels occur throughout New Zealand subantarctic waters, and make trips of about 2000 km each way to forage in the vicinity of the Polar Front at about 65°S, especially when gathering food for their young. After breeding, birds from New Zealand migrate to the North Pacific Ocean and Bering Sea before returning to New Zealand for the following breeding season.

The major colonies on The Snares, Codfish Island and Big South Cape Island are each estimated to comprise over 10,000 breeding pairs. In addition, there are a few small colonies on other muttonbird islands around Stewart Island, on islands off Fiordland and one on an island in Lake Hauroko.

Introduced mammals, particularly feral cats, rats, mustelids, feral pigs and dogs have had a significant impact on breeding colonies. Although previously breeding on inland hill country of both the North and South Islands all these mainland breeding colonies have been extirpated as a result of predation and changed land use. Large breeding populations are now restricted to predator-free offshore islands. Mottled petrels migrate to the North Pacific Ocean, where they may be at greater risk from pollutants and gill net fisheries.

Mottled petrels breed in large, dense colonies to sparsely aggregated pairs. They are monogamous with shared incubation and chick care. The nest is lined with leaf litter and is in a chamber at the end of a burrow. Birds tend to return to the same area from year to year, but may not use the same burrow in successive years. The single large (61 x 44 mm) white egg is laid from early December to early January. Incubation takes 48-53 days. The chicks fledge in May-early June at about 90-105 days of age, and are independent at fledging.

At sea, mottled petrels occur singly, although in the area of the Antarctic Convergence several may be seen following a similar flight path. Usually they feed by dipping their bill and face into the sea whilst still in flight, but occasionally they land on the sea to peck at small prey either on or just under the surface.

Mottled petrels nest in colonies and during the breeding season they start to arrive at the colonies about 50 minutes after sunset. During the early part of the breeding season colonies are very busy and noisy with birds cleaning out burrows and others courting. During this period and into the incubation period they respond to man-made calls, such as war-whooping. Mottled petrels are annual breeders that usually return to the area year after year, often with the same partner. After breeding the colonies are deserted and the birds migrate to the North Pacific Ocean and Bering Sea, arriving back at the breeding colonies from mid-October. There have been no long term studies of banded birds, and so there is no information about annual survival and longevity.

Mottled petrels mainly eat lantern fish, squid, and krill. Most prey are taken from near the surface of the sea whilst the bird is in flight, but they will land on the water to feed on prey at or near the surface.

A medium-sized gadlfy petrel with a smudgy grey band across the lower breast and belly, long broad wings, long narrow tapering tail, mottled grey and white face with a dark patch across each eye, a short black bill and pink legs. The upperparts are dark grey with a distinct darker M-marking; the underparts are white with a prominent wide black band across the underwing.

Calls from birds in flight and on ground