Geographical variation: Domestic stock is highly variable in appearance, though the ancestral population is monomorphic 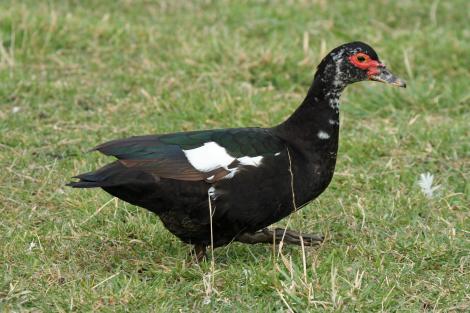 An easily recognisable, sparsely-distributed resident of bodies of water close to human habitation. All of New Zealand’s birds are derived from domestic stock; the wild variety is not present in New Zealand in a captive or wild state.

Muscovy ducks are large, goose-like ducks with highly variable plumage. Most New Zealand birds are either plain white or pied. Pied birds have a green sheen on their dark feathers. Birds with grey and brown colouring may also be present.  A small crest may be raised when birds are alarmed. The bill is either pink-and-blackish, or entirely pink, and the base is surrounded by bright red caruncles. They have relatively short legs, and are less mobile on land than other ducks. The legs and feet are partially or entirely pale orange in colour, and the toes have long, sharp claws. The male is much larger than the female, and can weigh over twice as much.

Similar species: Entirely white birds bear some resemblance to white domestic forms of mallards, and to male greylag geese, but are distinguishable by the red caruncles and body shape. Pied birds are unmistakable. Muscovy ducks can hybridise with mallards; hybrids are highly variable in plumage and have features of both parent species.

Muscovy ducks are not considered established in the wild in New Zealand. During the 1999-2004 bird atlas survey, Muscovy ducks were recorded in more than 1 per cent of the New Zealand mainland squares. They are sparsely distributed throughout the mainland on lakes, ponds, slow-flowing streams, and adjacent pasture close to human habitation. An attempted introduction to Adams Island, Auckland Islands in 1865 was not successful.

No population estimates are available. Birds that live in a semi-wild state are bolstered by birds that escape from captivity or are illegally released. They are the second-most commonly kept species of duck in New Zealand (after mallards).

Muscovy ducks are not known to have any negative ecological or biological impacts. Because of their grazing habits, it is possible they would cause damage to pastures if they were to increase in numbers. They are not protected.

Muscovy ducks nest in tree holes and hollows, as well as on the ground in areas with dense ground cover. The nest bowl is composed of debris and dead vegetation and is lined with the breast feathers of the female, which incubates the eggs and raises the young alone. Feral birds can breed year-round. There may be ten or more of the off-white eggs per clutch, and they have an incubation period of 35 days. Breeding success of New Zealand birds has not been investigated.

As most Muscovy ducks are recently escaped from captivity they not wary of humans and will allow a close approach. They are capable flyers, but are reluctant to do so. Their long claws assist with perching in trees. They do not form large flocks.

Feral Muscovy ducks often rely on hand-outs from humans. They also graze on grass and herbs, and sometimes take insects and even small vertebrates.

A bulky, goose-like duck with a highly variable plumage. The body carriage is low and the feet are orange and sharp-clawed. The bright-red caruncles around the face are diagnostic, and the bill is at least partially pink.

Anxiety calls from a pair anxious at recordist's presence