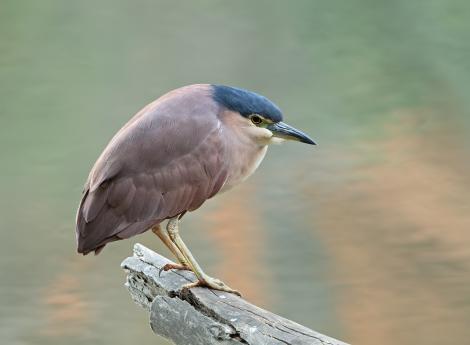 Recently established in New Zealand, the nankeen night heron is resident only along the Whanganui River, Manawatu-Wanganui. Elsewhere, it is an infrequent vagrant. As their name suggests, night herons are largely nocturnal, and seldom seen during the day unless disturbed from their roost. The nankeen night heron is closely related to the black‑crowned night heron, N. nycticorax, of the Americas, Africa, southern Europe, and Central, South and South-east Asia.

Te Atihaunui a Pāpārangi iwi at Jerusalem (Hiruhārama) consider nankeen night herons to be kaitiaki or caretakers of the remains of one of their tupuna, Hohepa Te Umuroa, who was exiled to Tasmania in 1846. His exile followed an incident in the Hutt Valley in which he was said to have taken part. He died of tuberculosis on Maria Island, Tasmania, the following year and was buried there. In 1988, his remains were repatriated and reburied at Patiarero marae at Hiruhārama. Nankeen night herons were first noticed in Jerusalem soon after, and are considered by local people to have carried Te Umuroa’s spirit back home.

The species’ common name, nankeen, refers to the similarity in colour of its underparts to the yellowish-brown cotton found originally around the Chinese city of Nanking, once used to make buff-coloured cotton trousers.

A stocky, short-necked heron usually found skulking inside tree canopies, where the birds roost during the daytime. It has a characteristic hunched appearance when perched, making it look broad-shouldered and large-headed. Adults have a black crown and hind neck, a narrow burnt-orange line above the eye, rufous-brown upperparts and wings, and a short square rufous-brown tail. The underparts cream with burnt-orange cheeks, neck and sides of upper breast, more intensely coloured when breeding. The underwing coverts are beige, and the flight feathers rufous brown. Breeding birds also have two thin white plumes projecting from the crown down towards the back. The bill is black and heavy, about the same length as the head, the top edge curving downwards towards the tip. Bare skin between the eye and bill is pale lime-yellow, and the iris orange, accentuated by a narrow ring of dark feathers around the eye. The legs are creamy yellow; shorter than other herons in New Zealand, the feet just projecting beyond the tail in flight. Sexes similar but the female is slightly smaller.

Juvenile and immature birds are sandy brown, speckled dark brown, reddish brown and off-white above, and streaked brown below, tinged rufous on the cheeks, neck and upper breast. Juveniles have a brown-streaked crown and nape; in contrast, immature birds have a darker, less obviously streaked cap. Wing coverts are dull reddish brown with white edges, aligned so that they look like serrated bars. Flight and tail feathers are chestnut-brown with prominent white tips. The bill is dark grey above grading to olive-yellow below, with a dark grey tip; legs lime-green.

Voice: a rasping qu‑arck given by birds departing the roost at night; females and immature birds higher pitched, qu‑ook. A short, deep quock given by roosting birds when disturbed.

Similar species: Australasian bittern is distinctly bigger, heavier, and browner, with broadly streaked underparts and finely‑barred underwings. Similar-sized cattle egret is much slimmer and paler; other heron species are considerably larger with longer necks, curved in flight, and longer legs that project well beyond the tail.

Nankeen night herons are resident only along the Whanganui River from around Pipiriki to Whanganui where it was first noted in the early 1990s and subsequently found breeding. Birds have been recorded from various sites there almost every year since. Elsewhere in New Zealand it is rare vagrant, recorded on at least 24 occasions between 1845 and 2013, ranging from the Snares Islands in the south to the Waikato River near Maungatautari and Pakowai, Hawkes Bay, in the north and east. It may have bred at Blenheim in 1958. Three banded birds released from Wellington Zoo in 1982 were subsequently seen separately at Pakawau, Golden Bay (Aug 1983), Waiwhetu Stream, Lower Hutt (Jan 1984), and Warkworth (1984). There is no evidence that these birds or those released near Wellington in 1852 became established or bred.

Nankeen night herons occur along rivers and streams, roosting during daytime in dense cover of both native and introduced evergreen trees. Roosts are known from Jerusalem, Kauarapaoa Rd and Kemp’s Pole (Whanganui River near Kaiwhaiki), and Upokongaro. These roosts are situated away from the Whanganui River itself, being inside settlements, close to human habitation (Jerusalem, Upokongaro), or along a stream and in nearby forest (Kauarapaoa Rd and Kemp’s Pole). Numbers at the Kemp’s Pole roost vary from 2-18,  not following any clear pattern through the year.

The Whanganui River population is estimated at about 50 birds.

Adults may be vulnerable to disturbance when breeding, and to predators when feeding, but are generally wary. Eggs and young chicks are likely to be susceptible to predation, but this has not been studied. No conservation measures are in place.

The only confirmed nest in New Zealand held three unequal‑sized chicks when found near Jerusalem in early November 1995. Three other apparently empty nests were found nearby. The nest was a platform of loose sticks situated in a tree fern in regenerating native bush on a steep slope above a stream, 600 m from its confluence with the Whanganui River. Sightings of recently fledged juveniles in February-March suggest egg-laying in spring. No other details known.

Little known. Almost completely nocturnal, most birds leaving their daytime roosts 23-36 minutes after sunset, when it is almost dark. Foraging areas are likely to be along edges of rivers and streams. Roosting birds are wary and secretive, but not necessarily shy, occasionally creeping out to get a better look at an observer, or sunning themselves on the edge of roost trees. In Australia, juveniles disperse widely after fledging, which may account for the high frequency of young birds among those recorded in New Zealand. In the southern part of their range in Australia, adult birds are partly migratory, moving northwards in winter, as well as moving in response to major rainfall and flooding events. Some may end up in New Zealand, as they do on other western and southwest Pacific islands.

Poorly known in New Zealand. Droppings of a bird at Tarara, Otago, contained the remains of freshwater crayfish. In Australia, they are known to take fish, frogs, freshwater invertebrates and hatchling sea turtles, among other things.

A large, stocky heron with a heavy black bill, black crown and nape, a burnt-orange line above the eye, creamy-yellow legs, rufous-brown upperparts and wings, and a short rufous-brown tail. The underparts are cream with burnt-orange on the cheeks, neck and sides of the upper breast.