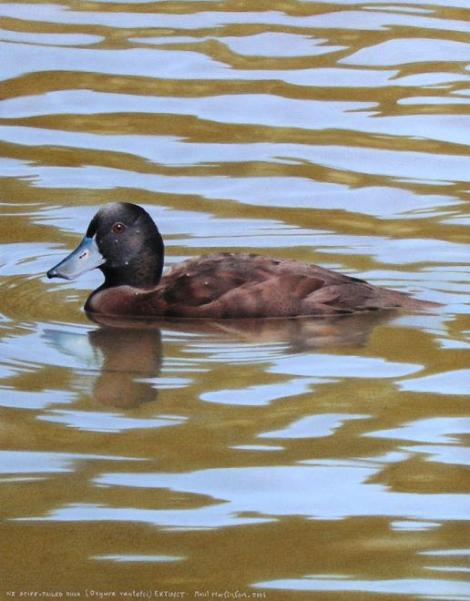 The New Zealand blue-billed duck was the only member of this widespread genus in New Zealand. Almost nothing is known about the species because it became extinct before European contact and its bones are rare. We can only speculate that it shared many habits with its presumed closest relative, the blue-billed duck (Oxyura australis) of Australia. It was probably an uncommon resident on lakes and swamps throughout New Zealand. Although the presence of Oxyura fossils in New Zealand was suggested as early as 1983, based on bones excavated in the 1960s and 70s, it was not until 2005 that this genus was confirmed for New Zealand (Worthy 2005). The specific name honours Gerry van Tets (1929-1995) who first identified the New Zealand fossils as being from the genus Oxyura.

A small compact duck, bearing a superficial resemblance to the New Zealand scaup but likely to have had the distinctive sexual plumage dimorphism shown by its Australian cousin. In breeding plumage, males of the Australian species are a rich chestnut colour with a black head and a cobalt-blue bill, while non-breeders, females and juveniles are a duller brown. All other members of the genus Oxyura have a distinctive stiff tail, so it can be theorised that the New Zealand form shared this feature and some of the distinctive behavioural traits of the genus. The New Zealand species was slightly smaller than the Australian species.

Fossils of the New Zealand blue-billed duck have been found at two sites only (representing 20+ individuals) and all but one bone is from Holocene deposits at Lake Poukawa in Hawke's Bay. A single South Island bone may be from the Wairau Bar, near Blenheim. The species probably shared the habits of the closely related Australian species which is almost wholly aquatic, often on large permanent wetlands. During the breeding season the Australian species is thinly distributed in densely vegetated swamps and secretive but it can form large flocks in open water in the non-breeding season.

Extreme rarity of the species in the New Zealand fossil record probably partly reflects the lack of fossil deposits from lakes rather than a true scarceness in life.

The New Zealand blue-billed duck became extinct before European contact, and so no records of live birds exist. Hunting for food by humans is the most likely cause of its demise and the South Island bone may have been from a human food midden.

Nothing is known about the New Zealand species' behaviour but the Australian blue-billed duck is polygamous, nests are mainly solitary and often contain 5-6 (white) eggs. Incubation and parental care is by the female only. The Australian species is renowned for its extraordinarily long pseudopenis, which is grossly large in proportion to the size of the bird.

Nothing is known about the food of the New Zealand species but the Australian blue-billed duck eats a wide variety of freshwater plants and invertebrates and frequently dives for food .

A small extinct duck related to the slightly larger Australian blue-billed duck. In breeding plumage, males of the Australian species are rich chestnut with a black head, sky-blue bill and stiff tail, while non-breeders, females and juveniles are a duller brown, so it can be theorised that the New Zealand form shared these features.