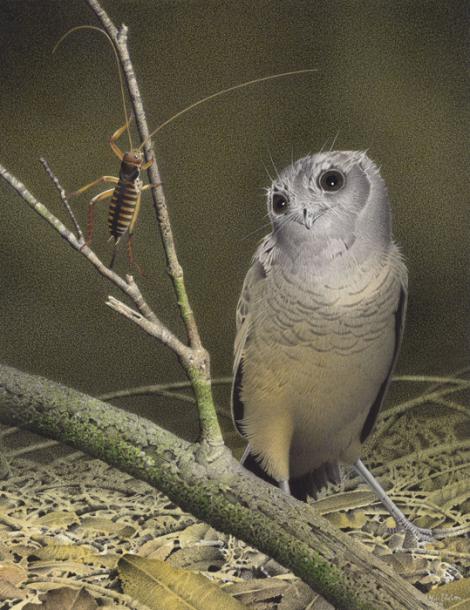 Owlet-nightjars are a small group of secretive, nocturnal insectivores. Seven of the nine extant species are found in New Guinea, with species also found in north Maluku (Indonesia), Australia, and New Caledonia. The name owlet-nightjar derives from the owl-like forward-facing eyes set in a facial disk combined with a small beak, rictal bristles, and large gape reminiscent of nightjars. However, appearances can be deceptive and owlet-nightjars are not related to nightjars (Order Caprimulgiformes), but to swifts and hummingbirds (Order Apodiformes). The extinct New Zealand owlet-nightjar was most closely related to the New Caledonian species Aegotheles savesi. Together, these two species are considered to have separated from the owlet-nightjars tree long before any of the other surviving species.

The New Zealand owlet-nightjar was the largest of all the owlet-nightjars. It is known only from isolated bones and partial skeletons, but reconstructions show the typical upright stance of the group. It is likely to have had a facial-disk and forward facing eyes, small bill with a large gape, relatively small wings, and long legs.

Found throughout the North and South Islands in forest or heavily wooded habitats.

The New Zealand owlet-nightjar was probably extinct by the 13th Century due to predation by the Pacific rat (kiore, Rattus exulans) introduced when Polynesian settlers first arrived about a thousand years ago.

While the New Zealand owlet-nightjar had a well developed keel on the sternum, its relatively small wings and long legs indicate that it was either flightless or a poor flier. It is thought to have been nocturnal, spending most of its time foraging on the forest floor for insects and, possibly, frogs and small reptiles.

A giant owlet-nightjar with relatively short wings and long legs suggesting it was flightless or a weak flier. It is likely to have had facial disks and forward facing eyes, a small bill with a large gape, and a well developed keel on the sternum.