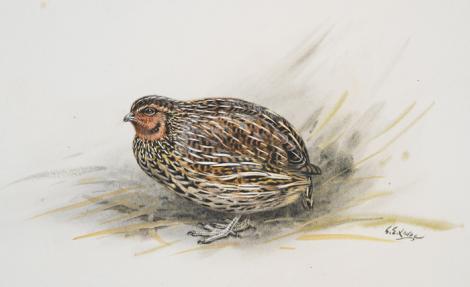 The New Zealand quail was a small ground bird and the only native representative of the pheasant and quail family. It was the first bird species known to have become extinct following European colonisation. Previously, it was common throughout the North and South Islands, with Māori exploiting it as a food source. There is little information available on its biology, apart from what can be determined from the few specimens held in museums.

The New Zealand quail was most closely related to the Australian stubble quail Coturnix pectoralis, and was not particularly closely related to the brown quail introduced to New Zealand from 1871. Both the female and male had barred white-and-black markings over brown base feathers. The nape varied in colour from brown to rufous-brown in males. The underbody feathers were buff with varying amounts of black barring. The female was slightly larger than the male. Their eyes were light hazel, bill black, and legs and toes pale flesh brown.

The New Zealand quail was widely distributed throughout the main islands of New Zealand, especially where there was grassland habitat. It was most abundant in the South Island, especially east of the Southern Alps. Its distribution expanded after the arrival of Maori, who burnt large areas of forest thus creating grassland. By the mid-1800s, it had become scarce in the North Island and decreased rapidly in Canterbury as the result of agricultural conversion of the grasslands, and hunting. It was presumed extinct by 1875.

The New Zealand quail was primarily an open-country bird, with fossil evidence and early historical records indicating that its preferred habitat was grassland and shrubland. As with other Coturnix species, the New Zealand quail had very stout legs and a torpedo-shaped body with which to run through thick grass and undergrowth.

Both archaeological and European historical records indicate that the quail was widespread throughout New Zealand, apparently living in extended family coveys. Before the arrival of humans, quail coexisted with a wide range of potential avian predators. After Polynesian settlement, quail were subjected to hunting and potential predation by Pacific rats (kiore) and kuri (Polynesian dogs). New Zealand quail became extinct before ship rats, stoats and ferrets were widespread, but they were exposed to about 100 years of predation by Norway rats and feral cats, as well as vastly increased hunting pressure following the introduction of guns.

The nest of the New Zealand quail was a cup-shaped indentation of flattened grass that was well concealed. The striped barring of the back feathers of the incubating adult (most probably the hen) blended perfectly with the ground cover surrounding the nest. The timing of breeding and the length of the breeding season is unknown.

Early European hunters described the call of the New Zealand quail as ‘twit, twit, twit, twee-twit’. Buller stated that quail were very common, and that daily bags of 40 or more birds were not uncommon.

Little is known about the diet of the New Zealand quail. It was apparently mainly herbivorous, feeding on seeds, flowers and foliage. The closely-related stubble quail in Australia also takes adult insects, caterpillars and small frogs, as well as seeds and foliage.

A small extinct quail with barred white-and-black markings on brown base feathers, light brown eyes, short black bill, and pale flesh brown legs and toes. The nape varied in colour from brown to rufous-brown in males and the underbody feathers were buff with varying amounts of black barring; females were slightly larger than males.