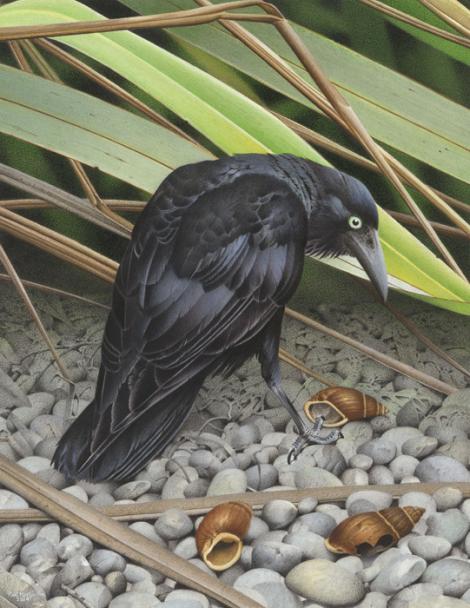 All three subspecies of the endemic New Zealand raven are extinct. Weighing up to one kilogram, it was one of the largest songbird species, a group which comprises more than 5,000 bird species worldwide. Only the common raven of the northern hemisphere, thick-billed raven of Africa, and superb lyrebird of Australia are heavier than 1 kg.

Most ravens and crows have similar body shapes, plumage and behaviour, and so the New Zealand raven was probably glossy black, omnivorous and aggressive. It had relatively long, slender legs, a long, broad, pointed bill and retained strong powers of flight.

Once common around coastal New Zealand and the Chatham Islands, ravens were probably a raucous feature of seasonal seal, sea lion and seabird colonies, where they would have eaten unprotected pups, eggs, chicks and offal. The diet probably also included fish, snails, shellfish, skinks, insects, invertebrates and fruits. They became extinct before European contact. The presence of bone remains in midden sites shows that they were eaten by humans, and they may have been impacted by the rapid extirpation of mainland and Chatham Island seal and seabird colonies following human arrival.

New Zealand ravens were common around coastal New Zealand, including Stewart Island and the Chatham Islands, and bones have been found at a few inland sites close to the coast. There is an anomalous record of a single raven bone from subantarctic Enderby Island in the Auckland Islands, found near an archaeological site. How this bone got there is uncertain: was it from a vagrant bird that flew there from Stewart Island, or was it taken there by humans?