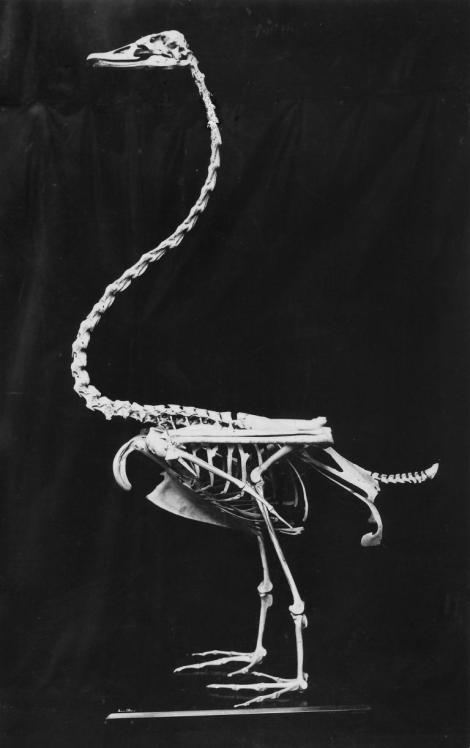 Black swans are a common and prominent part of New Zealand’s wetland fauna today but the country once had its own endemic forms of swan that are now extinct.

In 1890, the Canterbury Museum’s Director, Henry Ogg Forbes, described Cygnus sumnerensis based on large swan bones found near Sumner, Christchurch. By 1998, based on a new detailed study of its size, the extinct New Zealand species was considered to be exactly the same as the living black swan.

The ancestors of the New Zealand swan are thought to have colonised New Zealand 1-2 million years ago.

The colours of New Zealand’s extinct swan were not recorded so are unknown but, being a close relative of the black swan, perhaps it was similarly coloured. The extinct swan was considerably larger than the black swan, with a relatively more robust skeleton and longer legs. It weighed 6-10 kg compared with the black swan’s weight of 4-9 kg, so it was 20-32 % heavier. The Chatham subspecies was very similar to the mainland New Zealand form but had a less robust humerus and femur.

The species was found in prehistoric bone deposits, including swamp and dune sites, dating back several thousand years throughout New Zealand and on Chatham and Pitt Islands.

Bones of both extinct swan subspecies are common in prehistoric bone deposits, indicating that the species was once common and widespread.

The swan became extinct on mainland New Zealand by about 1450 AD and by about 1650 AD on the Chatham Islands, quite soon after humans arrived in the country in the late 13th century. Remains of the species have been found in widespread archaeological food midden sites and its extinction was evidently due to over-hunting.

Unknown; however, the black swan breeds on freshwater bodies where most breeders form monogamous pairs and defend territories. Black swans build nests made of large mounds of vegetation and lay an average of 5-6 eggs.

Due to the swan’s extinction several hundred years ago, nothing has been recorded about its ecology. Although its skeleton shows that it was capable of flight, it had a reduced flying ability compared with the black swan, so it probably had a more terrestrial lifestyle.

There are no records of its food or feeding habits but it presumably had fairly similar behaviour to the black swan, eating soft plants taken underwater or grazed in swampy habitats.

Millener, P.R. 1999. The history of the Chatham Islands’ bird fauna of the last 7000 years – a chronicle of change and extinction. Pp. 85-109 in Olson, S.L. (ed.). Avian Paleontology at the close of the 20th century: proceedings of the 4th international meeting of the Society of Avian Paleontology and Evolution, Washington, D.C., 4-7 June 1996. Smithsonian Institution Press, Washington, D.C.