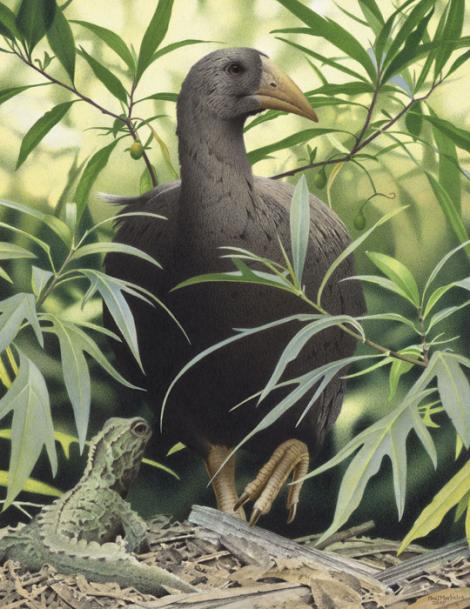 The North Island adzebill, and the closely related South Island adzebill have been placed as the sister taxa to all other New Zealand rails.  An early Miocene (19-16 million-years-old) adzebill, Aptornis proasciarostratus, has been described from the St Bathan’s Formation, central Otago.

The North Island adzebill was originally described as a moa by the great Victorian anatomist Richard Owen, on the basis of a leg bone. It was a large flightless bird with a massive, thick-walled skull and a remarkable bill that was long, pointed, down-curved, and robust. The wing bones were very much reduced and the wing would not have been visible in the living bird. The sternum was reduced with almost no keel. Reduced wings, lack of keel, and large size meant the bird was flightless. The legs and toes were short and robust.

North Island adzebill were found at scattered sites throughout the North Island. It is thought that the species preferred drier, more open scrub or grassland habitats because their widespread distribution during the dry climate of the Pleistocene became restricted to drier eastern areas in the succeeding Holocene. They were found from sea level to 1000 m, but were absent from subalpine habitats.

The North Island adzebill was extinct before European settlement. The presence of adzebill bones in middens indicates that early Polynesian settlers hunted the species, and this is the most likely cause of the bird’s extinction.

Richard Owen suggested that the adzebill used its formidable beak to grub in the soil for animal, rather than plant material. Owen suggested that giant worms may have been among the prey targets. The small sets of gizzard stones recovered from two complete skeletons indicate a predatory rather than herbivorous life style, and this was confirmed by an analysis of bone gelatine proteins which had the characteristic nitrogen isotope composition typical of predators. They probably hunted a variety of vertebrates such as lizards, tuataras, and birds as well as larger invertebrates.