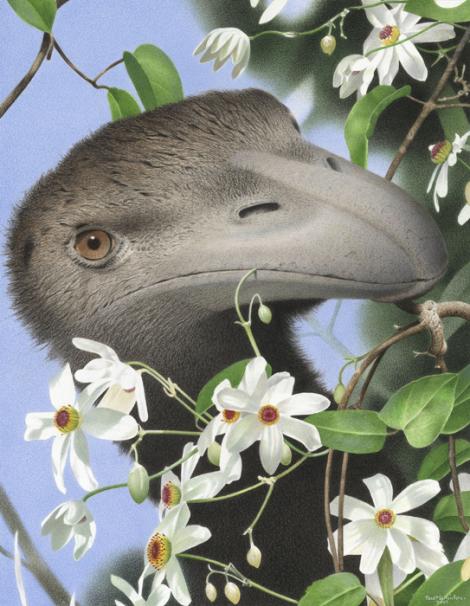 Slightly smaller than the South Island giant moa, the North Island species was the second tallest of the nine moa species, standing up to 2 metres at the back and up to 3 metres with neck stretched upwards. Both giant moa species (genus Dinornis) had relatively long, shaggy hair-like feathers up to 18 cm long, covering the body, and exhibited the greatest size difference between males and females of any bird, with adult females being much larger than adult males. Size also varied by habitat,  with lowland populations in mosaic shrubland larger than upland populations in closed forest. DNA study suggests that moa were more closely related to the flighted South American tinamou than to the kiwi.

The North Island giant moa occupied a wide range of vegetated habitats from coastal dunes to inland shrublands, forests, and subalpine herbfields and grasslands in the North Island and Aotea/Great Barrier Island. Bone remains show that it was widespread in forest and shrubland areas on the coast and adjacent hinterland from North Cape to Wellington.

The North Island giant moa was widespread and abundant. Its bones are common in archaeological sites.

The main cause of extinction was overhunting by humans for food. Moa chicks may have also been eaten by the introduced Polynesian dog (kuri).

The remains of a large white moa egg (190 x 150 mm) thought to be from this species was found in a rock shelter near Waitomo. It is estimated that this egg would have weighed over 3 kg when fresh.

The relatively long leg bones of giant moa indicates that they were more agile than other large moa species, and a large olfactory lobe suggests that they had an acute sense of smell.

Based on their skull and bill morphology and the frequent presence of large masses of gizzard stones, it is likely that North Island moa consumed a fibrous diet of twigs and leaves. Flowers, berries and seeds from trees, shrubs and vines were also taken, but they consumed few herbs or grasses.

The smaller of the two giant moa species with a very tall, relatively slender body and relatively small, broad, head with a robust decurved bill. Females were 1-2 times larger than males.