Geographical variation: Three subspecies recognised, with the nominate glacialis breeding in the high-Arctic North Atlantic, auduboni breeding in low-Arctic and temperate regions of the North Atlantic, and the Pacific Ocean form rodgersii breeding on coasts and islands of eastern Siberia and south-west Alaska, including many sites in the Aleutian and Kurile Islands. 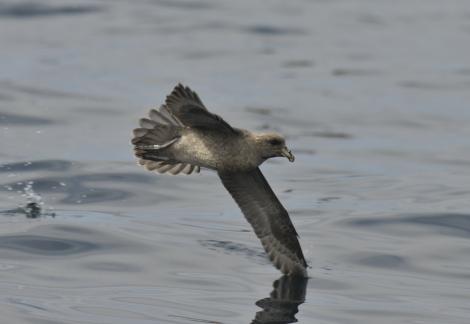 The northern fulmar is an abundant, medium-sized gull-like petrel that has been recorded in the Southern Hemisphere once only, south of New Zealand in 2014. The New Zealand bird was a dark morph individual with head and bill characteristics typical of the form found in the northern North Pacific Ocean (F. g. rodgersii).

The northern fulmar is a heavy-bodied, medium-sized seabird that ranges in colour from pale grey to dark grey. Dark morph birds (also known as 'blue morph') are most likely to reach New Zealand seas, as they are the predominant morph at lower latitudes in the North Pacific. They are entirely dark grey (some with a pale patch at the base of the primaries on the upper wing), though even the darkest birds are paler than other dark petrels or shearwaters of a similar size (e.g. flesh-footed shearwater). Plumage becomes browner when worn. The feet are dull pinkish-grey, and the bill is pale bluish-grey (or pale pinkish yellow) with a darker orange-yellow terminal hook, often separated from the rest of the bill by a narrow blackish band. Moulting birds, or those in faded plumage can have blotched dark-and-pale plumage quite unlike other petrels (though compare with Cape petrel). Pale morph birds have a small dark patch in front of the eye on an otherwise white head, with underparts including underwings also white; the silver-grey upperwings have a whitish panel at the base of the darker primaries. The bill is usually pinker than in dark morph birds, with the black subterminal ring reduced or absent; legs and feet pale pinkish-grey. Intermediate colour morphs occur in a continuous gradation. The wings are broad and rounded, with a span of 100-110 cm. Pacific birds (F.g. rodgersii) have relatively smaller heads and more slender bills than low-latitude Atlantic birds (F.g. auduboni).

Voice: Northern fulmars make grunting and chuckling noises when in a flock squabbling over a rich food source. The main call at colonies is a raucous cackling.

Similar species: pale morph northern fulmars looks similar to Antarctic fulmars, but they have different coloured bills (Antarctic fulmar has pink bill with blue nasal tubes and black terminal hook). Dark morph northern fulmars are generally paler than dark shearwaters of a similar size, and have larger heads, broader wings and more stocky bodies. White-chinned petrel is darker, and the bill is paler without the deeper yellow terminal hook. Dark morph northern fulmar may appear similar to an immature southern black-backed gull, but the latter has a dark bill of different structure, and northern fulmar is stockier with a thicker neck. The smaller fulmarine petrels (including both fulmar species and Cape petrel) fly with distinctive shallow wingbeats and straight wings, quite unlike other petrels and shearwaters.

The northern fulmar is abundant in cold temperate and polar seas in the northern hemisphere, with F.g. rodgersii breeding at numerous cliff sites in eastern Siberia (Kurile, Commander, Kamchatka, Wrangel, Pribiloff, St Lawrence Islands and adjacent coasts), Aleutian Islands and Alaskan Peninsula. Outside the May-September northern summer breeding season, the at-sea distribution extends to Japan and Baja California south to about 34° N (exceptionally to 22° N, Mexico). A bird photographed off Valparaiso, Chile, on 11 February 2017 was the second record of this species from the Southern Hemisphere.

The northern fulmar has been recorded within 17 km of the North Pole, further north than any other petrel.

A single record of a bird photographed at sea east of the Snares Islands in February 2014 (first Southern Hemisphere record).

The northern fulmar has a very large range and an increasing population estimated at more than 20 million individuals. It is classified as Least Concern by the IUCN Red List.

Northern fulmars are highly sociable birds, and often feed and rest in large flocks. Large congregations of birds, often mixed with other seabirds, such as shearwaters and kittiwakes, gather around food concentrations at sea. They are the most common ship-following species in the northern North Pacific, often in vast flocks, and are noisy and aggressive while feeding in large congregations.

Northern fulmars consume crustaceans, fish and squid, including large quantities of fishery discards. Food is taken by surface-seizing, and shallow dives to about 4 m.

A medium-sized gull-like petrel, ranging in colour from completely dark grey to pale grey above with white head and underparts. All colour forms have a pale grey or pale yellow bill with a prominent darker yellow terminal hook.

Cackling by three adults displaying on a ledge, gulls in background

Cackling by three adults displaying on a ledge, gulls in background

Defensive spitting by a chick that had fallen from its nest, adults cacking in background

Defensive spitting by a chick that had fallen from its nest, adults cacking in background