Geographical variation: Nil (previously considered to be a colour morph of yellow-crowned parakeet) 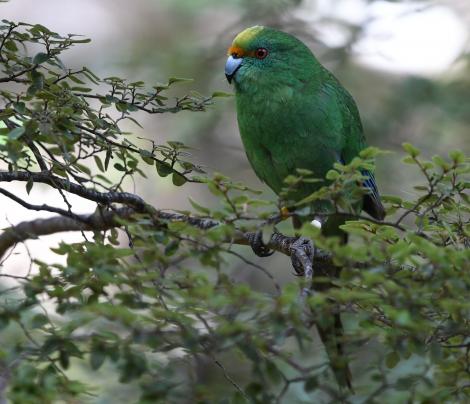 This budgerigar-sized parakeet is usually quiet and difficult to observe. A loud brief chatter or quieter contact call may give away its presence, but locating the bird can be extremely difficult. Orange-fronted parakeets are often confused with yellow-crowned parakeets. Formerly occurring throughout New Zealand, orange-fronted parakeets are now confined to four South Island beech forest valleys. Captive-reared birds have also been released on four offshore islands.

Orange-fronted parakeets are small, green, long-tailed parakeets with a bluish tint to their plumage, and azure blue on their outer primaries and primary coverts.  The crown is lemon yellow, and the frontal band above the eyes is orange, as are patches on either side of the rump. Colours tend to be brighter in males. Juveniles are duller, especially the frontal band and crown patch, which may be absent.

Voice: most often a loud chatter call, of varying intensity and length. When a pair is together, softer contact calls are commonly heard, sometimes in addition to squeaks and churring. Calls made during courtship feeding and mating are quite distinctive, and comprised of single notes.

Similar species: can be easily confused with the yellow-crowned parakeet, especially when juveniles are present. Yellow-crowned parakeets have a crimson frontal band and rump patches. A clear view of the frontal band or rump patch is required to accurately separate the two species. Identifying fledgling parakeets is particularly difficult, as their heads have very little coloration. The calls of the two species are very similar.

Orange-fronted parakeets are restricted to four beech (Fuscospora spp.) forest valleys in the South Island: the Hawdon, Andrews and Poulter valleys in Arthur’s Pass National Park and the south branch of the Hurunui valley in Lake Sumner Forest Park. Their distribution within these valleys is very patchy, and the species is absent from most areas. They have been translocated to four islands: Maud Island and Blumine Island in the Marlborough Sounds, Chalky Island in Fiordland, and Tuhua (Mayor) Island in the Bay of Plenty.

Orange-fronted parakeets occur almost exclusively in beech forests, although they are occasionally recorded in subalpine tussock and open, matagouri shrubland. They typically feed at the tops of tall trees, but can also be found amongst low vegetation, or on the ground. Dense, regenerating bush is also popular, especially with juveniles. All parts of the forest are used, including streams for drinking and bathing. If a beech mast has occurred, orange-fronted parakeets will usually be found consuming seeds high in the canopy.

This species is exceptionally difficult to count, largely because of its rarity, and cryptic and quiet nature, but also due to its similarity to the sympatric yellow-crowned parakeet. Numbers in the Hawdon, Andrews, and Poulter valleys are extremely low. The south branch of the Hurunui currently has the largest population on the mainland, being comprised almost entirely of birds that have been released from captivity. Even so, there are probably fewer than 100 mature parakeets on the mainland, and perhaps 200-300 on islands following translocations.

The main threat to orange-fronted parakeets is from introduced predators, especially ship rats and stoats, and particularly during irruption years following mast seeding events. Parakeet eggs and nestlings are also vulnerable to predation by possums, and fledglings are an easy target for cats. Habitat modification is also a threat, predominantly by deer and possums. The recent discovery of Psittacine Beak and Feather Disease (PBFD) as far south as the Eglinton Valley (Fiordland), is also of concern. Competition with introduced species could be an issue as well, and common starlings are known to have taken over at least two hollows used by orange-fronted parakeets.

The three main actions taken to prevent the extinction of orange-fronted parakeet are: 1) control of rats, stoats, and possums in the valleys where orange-fronted parakeets occur; 2) protection of nests by fitting metal collars around the trunks of trees at nest sites; and, 3) rearing captive individuals at Isaac Conservation and Wildlife Trust for release on predator-free islands and intensively managed sites.

Research is underway to get a better understanding of the species’ ecology and breeding biology in the wild, and trials are being undertaken to determine the effectiveness of supplementary feeding. Testing of individual birds for PBFD is ongoing.

The conservation status of this species was returned to Nationally Critical in 2016, following a decline on the mainland after a beech mast in 2014/15, and a decrease in some of the island subpopulations.

Orange-fronted parakeets can breed in all months, but their main nesting period is between December and April, and incubation peaks in January. Mean clutch size is approximately 7, but a wide range has been recorded (from 1 to 10). Egg-laying is asynchronous, with an interval of 2 days between eggs. Incubation takes 21-26 days, and the nestling period lasts 35-45 days. Females appear to choose the nest site and undertake all preparation, incubation and brooding. The male provides most of the food, especially during incubation. However, females regularly leave the nest to feed briefly with the male. It is suspected that only the female feeds the nestlings for the first 10-14 days, as with other Cyanoramphus species. After this period, both adults feed the nestlings.

Multiple clutches are not uncommon. If the first nesting attempt is unsuccessful, then the pair is likely to nest again once a suitable hollow is found. Some pairs may breed 3 or 4 times in succession when food is plentiful, such as during a beech seeding event. The female may lay another clutch when the first nestlings are approximately 2 weeks old. This leaves the male as the sole provider for both the nestlings and the incubating female.

Nests are usually accessed through knot holes, most often in large branches or in the trunk of a tree. They predominantly nest in red beech (69% of monitored nests on the mainland, n=138) and standing dead trees (20%), but other beech species are also used. Nest bowls can be level with the entrance hollow, or over a metre deep. Recorded nest height varies between 2.5 and 26 metres.

Orange-fronted parakeets were formerly (1800s) widespread across the South Island and several records exist for the North Island, Hen Island and Little Barrier Island during this period. Along with yellow-crowned and red-crowned parakeets, they were recorded in large numbers across the Canterbury Plains during the late 1800s. These irruptions were probably the result of a prolonged breeding season driven by heavy beech seeding. The birds were shot in vast numbers due to their feeding on domestic fruit orchards.

Extensive habitat modification to both alpine and lowland areas has impeded the species’ ability to search widely for food when their numbers are very high. As a result, their present habitat may be insufficient to allow numbers to return to former levels.

Orange-fronted parakeets consume seeds, flowers, buds and invertebrates (e.g. scale insects and caterpillars). In a mast year, seeds become the dominant item in the diet, and appear to be the principal food for nestlings. Invertebrates appear to play a larger part in the diet of this parakeet species than for yellow-crowned parakeets. This may explain why they are often observed with insectivorous birds, such as yellowheads/mohua.

Rawlence, N.J.; Kennedy, M.; Scofield, R.P.; Tennyson, A.J.D.; Boussѐs, P.; Chambers, G.K. 2015. Taxonomic status of Cyanoramphus parakeets on the Auckland Islands and implications for the validity of the orange-fronted parakeet as a discrete species. Journal of the Royal Society of New Zealand 45: 197-211.

A small long-tailed parakeet with a blue-green wash to the under-parts, azure blue primary wing coverts and leading edges to outer primaries, a lemon-yellow crown, and an orange frontal band, which reaches the eye, and two orange patches on each side of the rump. Males tend to have a brighter hue; juveniles are duller, especially the frontal band and crown patch, which may be absent.

Adult chatter calls in a loose flock, with a kaka flying through

Chatter call of two adults, and some softer contact calls

Calls from captive birds, with several other parrot species in background