Geographical variation: Two subspecies recognised: benghalensis in central and southern Africa and south Asia south to western Indonesia, and australis in Australia. Australian painted snipe (australis) often considered a distinct species from the greater painted snipe  (benghalensis). The one sighting from New Zealand was not identified to species or subspecies. 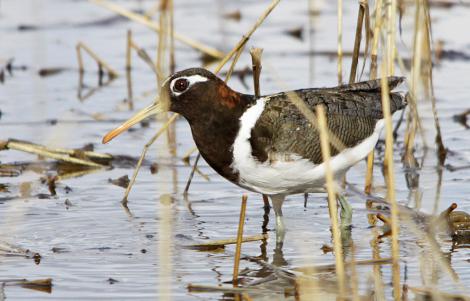 The painted snipe is an unusual wader that is placed in a separate family from the true snipes. They have reverse sexual dimorphism, with females larger and more colourful than males, and males undertaking all parental care. Denizens of densely-vegetated wetlands, painted snipe are rare birds in Australia, with a single record from New Zealand (Lake Ellesmere, 1986). They are nomadic in Australia, moving inland to breed on temporary wetlands following rain events, and retreating to coastal wetlands when the interior dries out.

The painted snipe is unmistakable if seen well. It is a medium-sized wader with a long (5 cm) drooping bill, and has unusual white markings on its otherwise dark upperparts. White feathers surround the eye and reach back to the ear coverts, forming an elongated white patch on the side of the head. White ‘braces’ extend from the breast around the front of the wing, then curl down the back, separating the dark wings from the even darker nape, neck and upper breast. The head, neck and breast of the female is a deep maroon-brown, while that of the male is buffy brown lightly streaked with white. A buff stripe runs from the base of the bill over the crown. The wings are intricately patterned in olive, buff and black. The bill is pale horn, the eye large and dark, and the medium-length legs are greenish. When disturbed, painted snipe fly low and slow, with dangling legs.

Painted snipe occur in all mainland Australian states (one record only from Tasmania), with most sightings from inland regions of the eastern states (Queensland to Victoria). Elsewhere the greater painted snipe occurs from southern and central Africa to India and Indonesia. Painted snipe in Australia are mainly found in freshwater wetlands, also occasionally in flooded grazing land. They prefer wetlands with dense vegetation.

Painted snipe are mainly active at dawn and dusk. They are very shy and retiring, preferring to feed within dense cover and only rarely venturing into the open. Painted snipe are usually seen singly or in a pair although groups of up to thirty birds have been recorded.

A medium-sized wader with a dark head, long pale yellowish bill, a buff stripe that runs from the base of the bill over the crown, and white markings on its otherwise dark upperparts. White feathers surround the eye and reach back to the ear coverts, forming an elongated white patch on the side of the head, and white ‘braces’ extend from the breast around the front of the wing.

Single male in a marsh, calling when flushed