Geographical variation: New Zealand birds are assigned to the subspecies H. h. leucocephalus, which ranges from the Philippines through Indonesia to Australia and New Zealand. 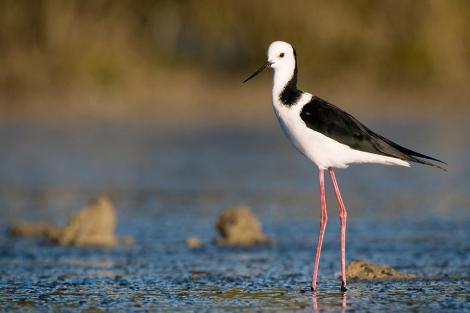 The pied stilt is a dainty wading bird with, as its name suggests, black-and-white coloration and very long legs. It is common at wetlands and coastal areas throughout New Zealand and may be seen feeding alongside oystercatchers.

Pied stilts tend to be shy of people and fly away, yapping, when approached.

Voice: the calls heard most often are high pitched yapping alarm calls. A less strident version is used as a contact call, including by flocks flying at night.

Similar species: juvenile black stilts may be mistaken for pied stilts. Black stilts are very rare and nest only in the braided rivers of the central South Island, though some migrate to coastal areas and flock with pied stilts. Juvenile black stilts usually have some black on their underparts between the legs and the tail, even if restricted to the flanks. This becomes more extensive at their first moult, and so any stilt with extensive black on the hind belly is likely to be an immature black stilt. Stilts with irregular or mottled black markings are likely to be hybrids between black and pied stilts.

Known elsewhere as the black-winged stilt, the pied stilt is a truly cosmopolitan bird with breeding populations throughout many of the tropical and warmer temperate regions of the world. They are believed to have been in New Zealand since the early 19th century, with the main growth in population from about 1870-1940.

Pied stilts live in all kinds of wetlands from brackish estuaries and saltmarshes to freshwater lakes, swamps and braided rivers. They feed in shallow water or mud and roost in shallow water or on banks or sandbanks. After the breeding season, birds migrate from inland locations towards more northerly coastal locations.

Pied stilts are numerous and not considered threatened in New Zealand. In contrast to the critically endangered back stilt, pied stilts are able to breed successfully in the presence of the same suite of predatory mammals. Differences that allow the pied stilt to breed more successfully than its black cousins include choice of nest site, and more effective anti-predator behaviours.

Pied stilts in lowland areas start moving towards their breeding sites in June-July each year. Inland birds start later in August-October. Occasionally a single pair will nest alone, but usually they breed in colonies of about 15 pairs. Large colonies may have up to 100 pairs. Both parents build the nest on the ground near water, often in a damp situation, and usually surrounded by or next to water. It may be built up to a few centimetres high with mud, vegetation and debris from nearby. Both adults incubate the 3-4 eggs, which hatch after c.25 days. The chicks leave the nest when dry, and can fly when 28-32 days old. The young are olive-brown to brown and downy with dark blotches on their backs, and white underneath. When hatched they are brooded by their parents but find their own food. The parents continue to care for the young who remain with them even during the end of season migration.

Pied stilts are highly gregarious and tend to stay in groups throughout the year. They feed together and roost together in what can become large and noisy flocks. They often associate with other waders – feeding and roosting alongside and flying with birds such as oystercatchers and godwits.

The main foods are invertebrates – terrestrial insects and worms when feeding on land, and aquatic insects and larvae when feeding in ponds, swamps and estuaries. In tidal areas the birds feed at low tide regardless of what time that occurs. Pied stilts primarily catch their food by sight, but when wading they may also probe and feel for food, especially when light is poor. When on land they may catch flying insects on the wing.

A compact, black-and-white stilt with long red legs and a long fine pointed black bill. Adult hybrid stilts have a black band of variable width across the breast.

Calls in flight and on ground at possible breeding site