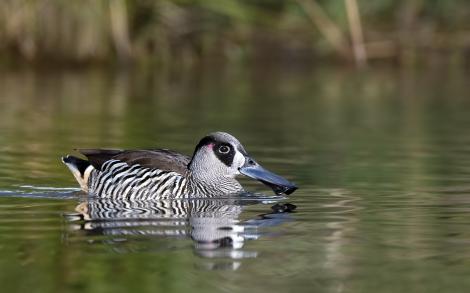 Non-birders often comment that birds have strange names, and that scientists don’t choose the most obvious feature of an organism for its common name. Birders would agree that the pink-eared duck is badly named, given the difficulty of seeing the pink ear in the field. When seen well however, it is a spectacular bird, not only for the pink feathers, but for its massive, oddly-shaped bill, and the striking zebra-striped sides. Highly nomadic, the pink-eared duck disperses widely in its native Australia, following good conditions for its breeding activities. It will breed in any month of the year when conditions are appropriate.

The pink-eared duck is a small duck with a dark eye-patch and heavily barred sides. In good lighting conditions, a small patch of pink feathers can be seen behind the eye. Like the blue duck of New Zealand, the pink-eared duck possesses a laterally protruding membrane of skin at the tip of the bill. (Although spelled differently, the genus name of the pink-eared duck Malacorhynchus, is shared with the species name of the blue duck malacorhynchos; both mean ‘soft-beak’). At a distance, the boldly barred flanks, lower neck and breast, combined with the dark eye-patch, wide-tipped bill, and whitish face are the best identification features. In flight, the tail tip and trailing edge of the wings are white, as is a narrow band on the rump. The head is held high whilst flying. The sexes are the same, with the female slightly smaller. Immature birds are paler than adults, with the pink ear patch less vivid.

Voice: sounds described include a trilling, chirruping or twittering, often given in flight; a high-pitched, sharp ee-jik or tu-ick; a low nasal grunk; and the bill-tossing call whee-ooo, weeee-you or who-ee-oo. Similar species: the Australasian shoveler shares the massive bill of the pink-eared duck, but is considerably larger, has a flat forehead leading in a straight line to the bill (the pink-eared has a prominent forehead), and the shoveler sits much lower in the water.

Endemic to Australia, the pink-eared duck is widespread, except for in the driest parts of Western and South Australia. Its greatest population density is in south-eastern Australia (although not in great numbers along the eastern seaboard), and the south-west corner of Western Australia. It is a rare visitor to Tasmania.

The pink-eared duck favours inland wetlands, and avoids coastal wetlands with high rainfall. It tends to stay away from the shore when feeding. It prefers stagnant, shallow water rich in aquatic life, including sewage ponds, and avoids fast-moving, clear or deep water.

A single bird was at the Mangere sewage ponds, Auckland, June-July 1990.

Even whilst in large flocks, the pink-eared duck remains in pairs. These will feed in a head-to-tail vortexing motion, each benefiting from the other disturbing aquatic organisms as they rotate. When feeding, their bills are frequently submerged to the line of the eyes, and they do not ‘up-end’. They often perch out of the water, e.g. on logs and branches. They fly with rapid wing-beats, and when flushed will circle wetlands.

The bill of the pink-eared duck is lined with fine lamellae for filter-feeding. The diet is mostly invertebrates (crustaceans and insects), and plant-matter including seeds. There is no New Zealand data.

A bizarre-looking small duck with fine black-and-white barring, a black eye-patch and an enormous bill.

Calls from a flock