Geographical variation: There are three subspecies of the red-footed booby, two of which are believed to have reached New Zealand. The white-tailed subspecies S.s. rubripes occurs throughout the tropical Indian Ocean and Pacific Ocean east to Pitcairn Island, and is the form most likely to occur in New Zealand. However, a dark-tailed bird believed to be S.s. websteri from the Galapagos Islands and eastern tropical Pacific was recorded at Muriwai in 2017. 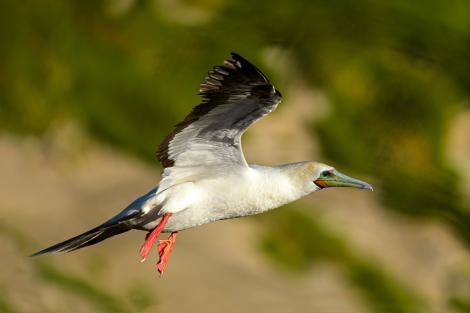 The red-footed booby is the smallest member of the gannet and booby family. Found throughout tropical seas, it exhibits a range of plumages from mostly white to entirely mid-brown (all morphs have black trailing edge to the wing). At close range its bright red feet are diagnostic. There have been two New Zealand records: 2-3 birds seen at the Kermadec Islands in 2016, and one at Muriwai gannet colony in 2017.

Red-footed boobies are slender gannet-like birds that occur in a range of plumages. Like other members of the family, they have a long conical bill, slender neck, long narrow wings, and long pointed tail. White morph birds are mainly white with light buff or orange on the head, and black primaries and secondaries (the main flight feathers on the wing), plus black coverts. There is a diagnostic black patch near the carpal joint on the underwing. Brown morph birds are mid-brown all over, with darker flight feathers. A common intermediate morph is mid-brown with a white rump and tail. Birds may be any shade between mid-brown and white, and are never as dark as the chocolate brown plumage of brown boobies. It is the only booby that can have a white tail (though it can be black in the Galapagos subspecies, and is dark in the darkest brown morph birds). All morphs have pale blue bills with pink base, pink facial skin, and bright red feet and legs. Females are slightly larger than males. Juveniles are brown or grey-brown, streaked darker, and are usually paler below, with grey or greyish-pink legs and feet. Birds become paler with age, until adult plumage and bare-part coloration is attained when about 2.5 years old.

Similar species: juvenile Australasian gannet and masked booby are both predominantly brown, but are much larger than [brown morph] red-footed booby and have dorsal plumage speckled with white. Juvenile brown boobies are darker brown on the back, head and upper breast, sharply demarcated from the paler brown underparts. Adult Australasian gannet and masked booby are much larger than [white morph] red-footed booby, always have some (or all) tail feathers black, and do not have a black patch near the carpal joint on the underwing. None of the other gannet or booby species have pale blue bills or red feet. Red-footed boobies hold their wings more forward, and flexed at the carpal joint (other boobies hold their wings straighter).

Red-footed boobies have a wide distribution over tropical seas of the Pacific, Indian and western Atlantic Oceans, including the Caribbean Sea. They forage over deep water up to 150 km from land. The nearest breeding colony to the Kermadec Islands is on ‘Ata (the southernmost Tongan island, 780 km to north-east), where 10,000 birds were estimated to be present in 1990. They also breed on cays in the Great Barrier Reef (Australia). Nests are almost always in trees or other vegetation, up to 70 m above sea level.

The first New Zealand record was two or three birds seen and photographed on and over Napier Islet (Herald Islets, Kermadec Islands) on 31 Mar and 2 Apr 2016. At least one each intermediate and brown morph birds were present. The next record was less than ten months later, when a white morph bird with a dark tail (indicating that it was from the eastern tropical Pacific) was first seen at Muriwai gannet colony on 18 Jan 2017.

Red-footed boobies are one of the most abundant and widespread members of the sulid family. However, many breeding colonies are subject to human disturbance, and rats may take chicks and unguarded eggs. As they nest in trees, red-footed boobies are very vulnerable to habitat destruction.

Red-footed boobies are more pelagic than other sulids (gannets and boobies), and are the species most likely to be seen far from land. They nest and roost in trees (most other boobies are ground-nesters), and often roost on moving vessels. Red-footed boobies may follow boats for hundreds of kilometres.

Their main food is flying-fish, but they also take squid (including flying squid). Prey is caught by plunge-diving (usually up to 8 m, sometimes higher) or in flight, when the fish and squid are air-borne, after being chased by underwater predators (including dolphins, mahi-mahi and tuna) or disturbed by ships. Red-footed boobies may feed in mixed flocks with other seabirds (including tropicbirds and noddies), and are frequently pursued by frigatebirds intent on stealing food items that the boobies have caught.

Red-footed boobies are colonial, with some colonies holding thousands of pairs. A single egg is laid (cf. 2 in masked booby and brown booby). Breeding can occur throughout the year, at intervals of 11-15 months after the last successful laying (with failed breeders relaying sooner). They can live to at least 23 years.

A large pale brown and/or white seabird of typical gannet shape and behaviour. Smaller and more lightly built than other gannets and boobies. Dark morph birds are pale brown all over, without sharp demarcation on the breast (cf. the much darker brown booby). All forms have diagnostic pale blue bills and bright red feet, and most have a white tail (unlike other boobies).