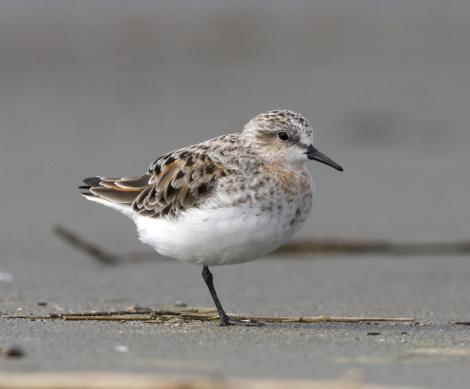 Stints are the smallest of the migratory waders – barely the size of a sparrow. The red-necked stint is the only stint species to regularly occur in New Zealand, with up to 200 spending the southern summer here each year. They are most often seen at high-tide roosts associating with other small waders, especially wrybills, and other sandpipers.

A tiny, delicate, nondescript wader with dark legs and a short, straight black bill. Red-necked stints in breeding plumage have a distinctive rufous ‘balaclava’, but otherwise they are pale grey-brown above and off-white below throughout the year. Dorsal feathers with dark shafts and pale fringes; flight feathers dark, with slight white wing bar. Rump white with dark centre. Feeds with rapid stabbing action.

Similar species: much smaller than most other wader species. Two other stint species occur as very rare vagrants. Least sandpiper has yellow legs; little stint is very similar to red-necked stint but is slightly smaller with a slightly longer bill that is down-curved at the tip; breeding plumage of little stint is more orange, with white throat and chin.

World population about 325,000 birds, with about 270,000 reaching Australia annually, and 50-200 reaching New Zealand. Fewer than 50 stay in New Zealand in the southern winter.

Like most waders using the East Asian-Australasian Flyway, red-necked stints are threatened by coastal pollution and reclamation and hunting along their migration route. However, red-necked stints largely avoid the shores of the Yellow Sea where the worst impacts occur (see lesser knot and bar-tailed godwit). The most important New Zealand sites are well protected.

Breeds in low tundra in the high Arctic. Monogamous; clutch of 4 eggs laid in a grass-lined depression on the ground. Incubation and chick-rearing shared. Young leave the nest soon after hatching.

Long-distance migrant, although details poorly known, mainly due to the bird’s small body-size limiting its ability to carry tracking gadgets. The distances travelled (apparently thousands of kilometres non-stop) are astounding given the bird’s tiny size and limited ability to store fat. Most arrive in New Zealand Sep-Nov, and depart in Mar-Apr. Two birds marked in Victoria, Australia were sighted at Lake Ellesmere. Red-necked stints associating with other waders are often obvious from their activity, continuing to feed while their larger companions roost. Stints feed together in loose flocks, probing rapidly with sewing-machine action.

A tiny wader with dark legs and a short straight black bill, which in breeding plumage has a distinctive rufous ‘balaclava’ but otherwise is pale grey-brown above and off-white below throughout the year. The dorsal feathers have dark shafts and pale fringes, the flight feathers are dark and the rump is white with a dark centre.