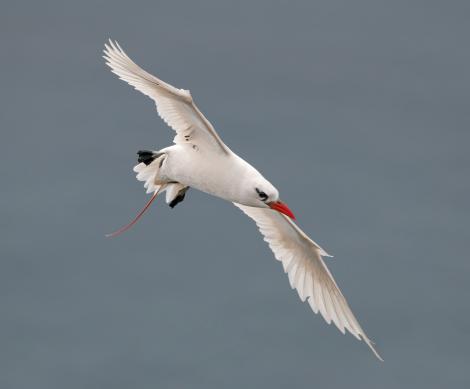 The red-tailed tropicbird is an aerial seabird, with a slender body shape, short neck, long and narrow wings, and two elongated central tail feathers that form conspicuous streamers. Its plumage appears predominantly white, the tail streamers and bill are bright red. Red-tailed tropicbirds are mostly seen over the open ocean. Their distribution encompasses the tropical and subtropical seas.

In flight, this pelagic seabird appears predominantly white, with (in adults) two long, conspicuously red central tail-feathers, which give the species its name. On close view, the feather shafts are dark grey and the head and body plumage show a remarkable pink suffusion. The bill is bright red; the dark-brown iris is shielded by a black eye-patch. The subspecies P. r. roseotinctus is distinguished by its longer bill and wings, and by the intensity of the pink suffusion. In immature birds, the plumage is barred black and white, with bold black on the outer wing feathers, the bill is dark grey to reddish colour, and the tail streamers are lacking.

Red-tailed tropicbirds breed in the tropical and subtropical Indian and Pacific Oceans, their at-sea distribution extends into warm temperate seas. The only New Zealand breeding sites are located on the Kermadec Islands, where they breed on Raoul Island, North Meyer, South Meyer, Nugent, Dayrell and South Chanter Islets, and Macauley and Curtis Islands. They are regularly seen at the Three Kings Islands, and there are about 40 records from the northern half of the North Island, with one as far south as Akaroa.

Red-tailed tropicbirds feed over the open ocean, seeking cool, low salinity, nutrient-rich waters.  Nest sites are typically in coastal cliff crevices or on ledges that have some sheltering vegetation.

About 50-100 pairs of red-tailed tropicbirds breed on Raoul Island and adjacent islets. Up to 130 have been seen over Macauley Island, but no breeding population estimate is available. About 1000 pairs breed on Norfolk and Lord Howe Islands. All New Zealand breeding sites are now free of introduced predators. Elsewhere in their breeding range, nesting birds are vulnerable to dogs and feral cats, and rats may take eggs or chicks. El Niño events have caused breeding failures and drops in population numbers in the eastern and central Pacific.

Red-tailed tropicbirds nest solitarily or form loose breeding colonies, where suitable nesting sites are available. The prolonged breeding season extends from December to August. On the Kermadec Islands, laying typically peaks in December and January, with most nests containing young from mid-January to May. Nestlings have been found as late as August. The timing of breeding can vary substantially from year to year. The nest scrape is dug with the feet and is defended as territory and re-used across years. A single egg is laid, though replacement laying can occur after egg loss. Both sexes share incubation and chick provisioning. Food is delivered to the chick by regurgitation, with the parent inserting its bill into the chick’s gorge. The chick is semi-altricial, downy at hatching, and independent of its parents at fledging.

The pair-bond is monogamous and often retained across seasons. Pairs that raise their chick successfully are more likely to breed together in subsequent years. Birds perform aerial displays in groups close to the breeding sites, which play a role in mate choice. At sea, red-tailed tropicbirds are mostly seen foraging solitarily or in pairs. The flight is characterized by slow regular wing beats alternating with gliding. Prey is caught by plunge-diving. Red-tailed tropicbirds are highly mobile, and disperse widely over tropical and subtropical seas.

Red-tailed tropicbird diet at the Kermadec Islands has not been studied. Elsewhere they feed chiefly on fish (predominantly flying fish and clupeids) and cephalopods, with a small proportion of crustaceans.